Big thanks to everyone who participated in the webinar last night. It was a new experience for me talking to the computer without really knowing who was listening and watching from the other side. After reading your comments on Instagram, I’m thrilled to know that it resonated with many of you, and I can’t wait to see where handwork takes you in the future!

But now, to Quilt Market. It was my first time in Minneapolis, and the city was a lot of what I expected–good food, friendly people, plenty to see and do (if not at the convention center). Luckily, it wasn’t too crazy cold, but it was a change of temperature from the 90s that I’m used to in Florida. One major (personal) highlight was the sauna in my hotel–that’s how I like to do a trade show! A friend and I made the sauna an early morning ritual each day before the show, which made a massive difference in taking the edge off of what is an otherwise exhausting event. I do love a sauna.

Overall it was a good Market. I didn’t get out to see everything and everyone as much as I would have liked, but that’s kind of the way it is. I always say that folks following the show from Instagram see more of the show than those of us who are actually there. Or at least those of us spending most of our time in our booths.

Here’s the convention center at the beginning of setup. It was an interesting building with three very large domes. I’m not sure what happens up there, but they sure have plenty of ladders and walkways to cover them. 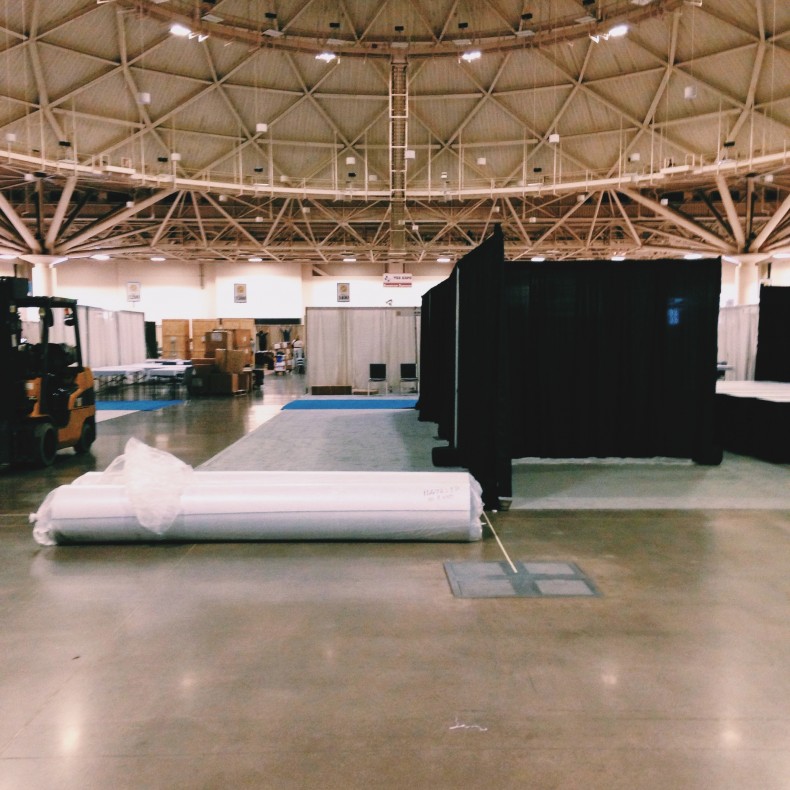 The first day of set up was a little slow for me because of some errands, but there was plenty of focus on the second day as I tried to pull it all together. 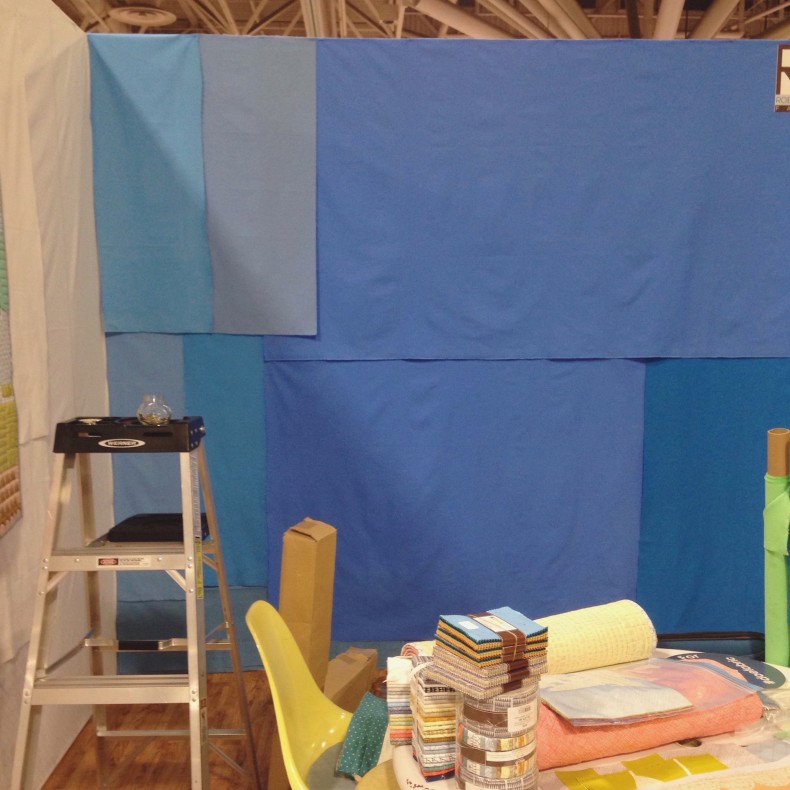 The booth strategy was a fairly simple one. I liked the ideas of layers and layers (of fabric…ideas…projects…), which I articulated by way of lots of fabric, plenty of quilt blocks and some of my drawings and sketches. 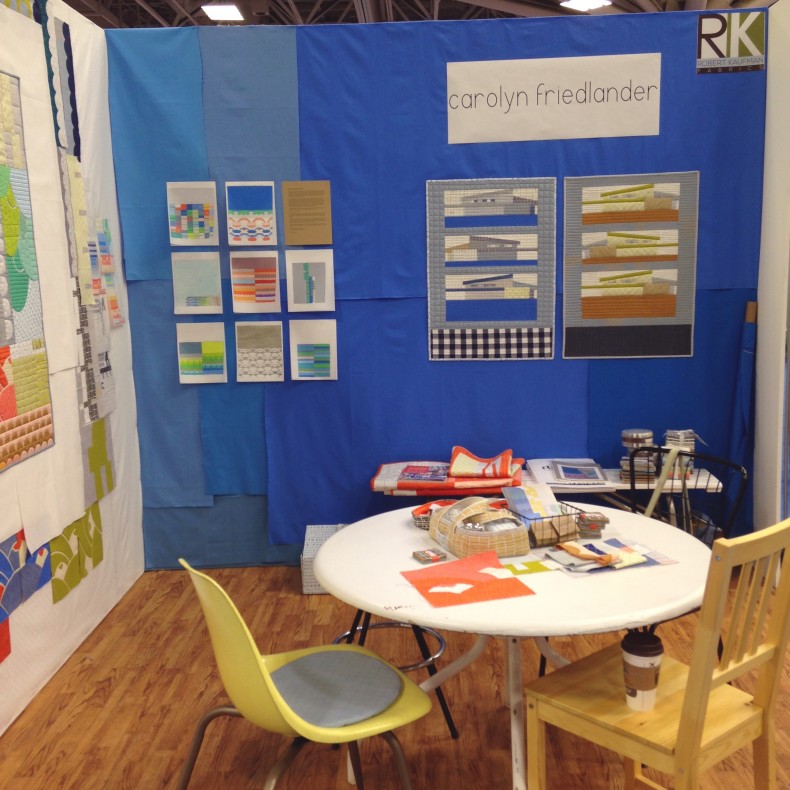 I knew that I wanted to get people stitching in the booth, so before setup I did some local junk foraging and found some goodies. 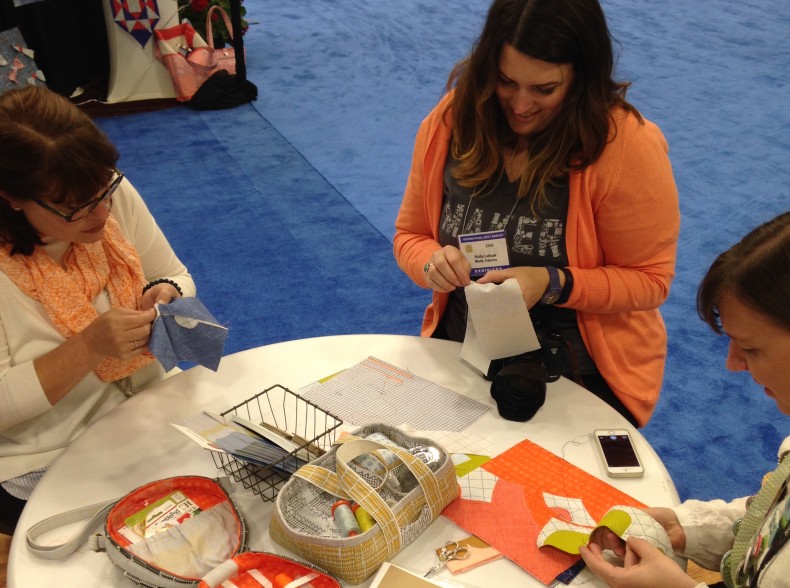 I didn’t know if people would be in to sitting down and stitching, but they totally were. I know that it was a welcome reprieve from the hustle of the show floor. Plus, it was a great chance for me to catch up with them, making it a win-win. 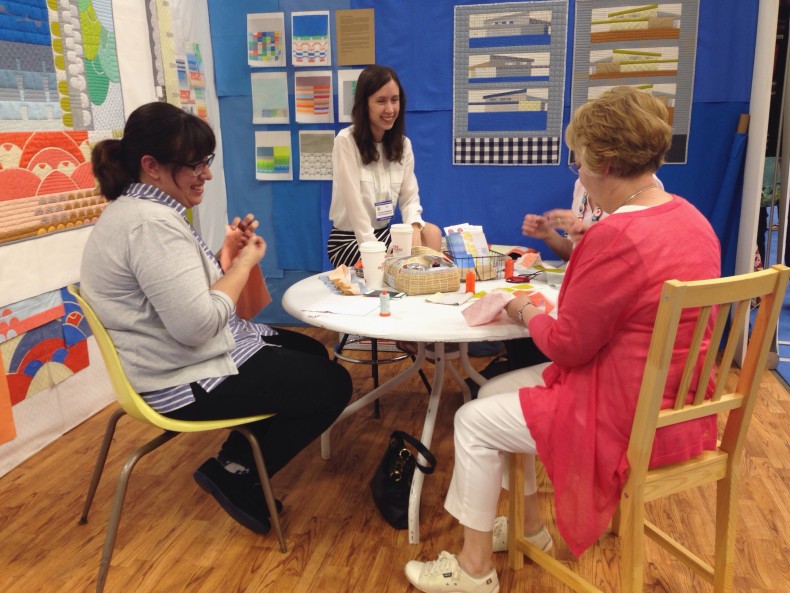 Even Ken Kaufman took a turn working the needle. 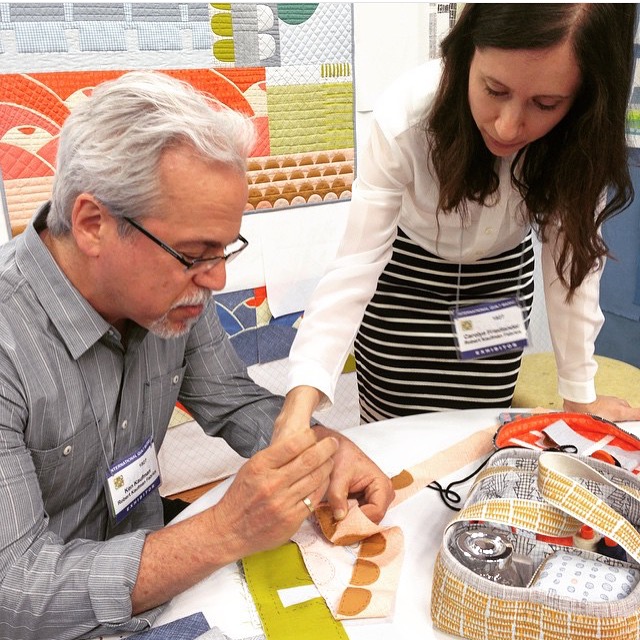 My booth neighbor, Valori Wells, had some really beautiful samples including many that she’d overprinted. 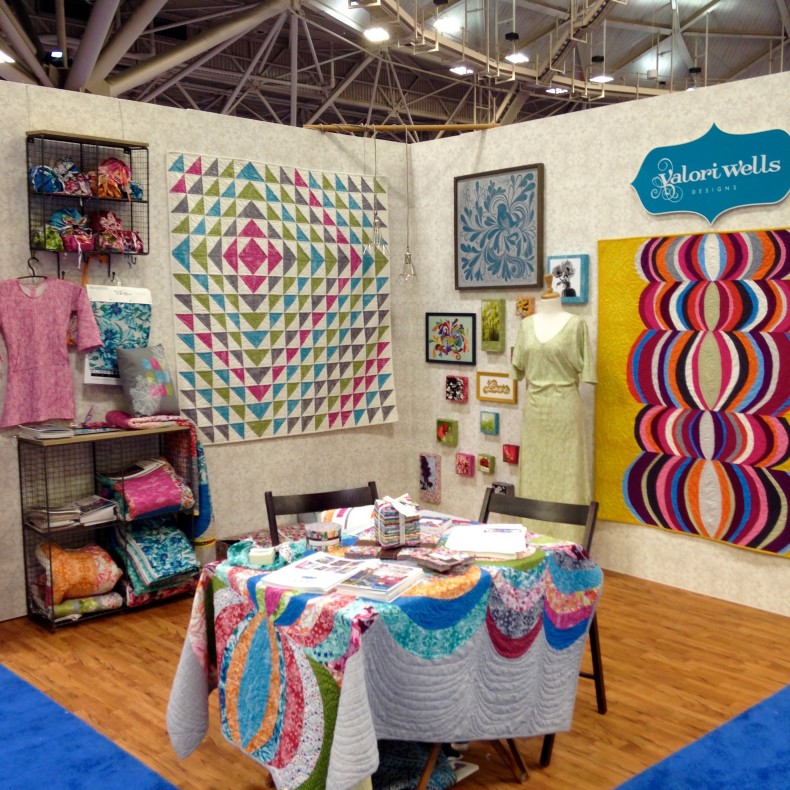 It was a delight to welcome 3 new designers to the Robert Kaufman family–Elizabeth Hartman, Angela Walters and McKenna Ryan (whose booth I sadly did not get a picture of–but it was lovely and won an award!) 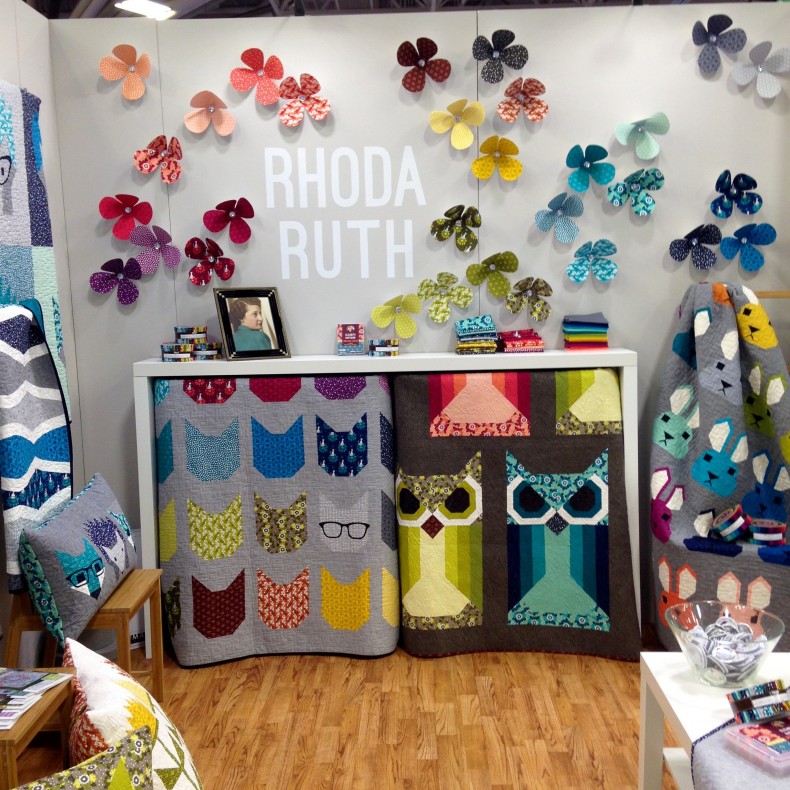 This was Angela’s booth, which featured her new line, Drawn. 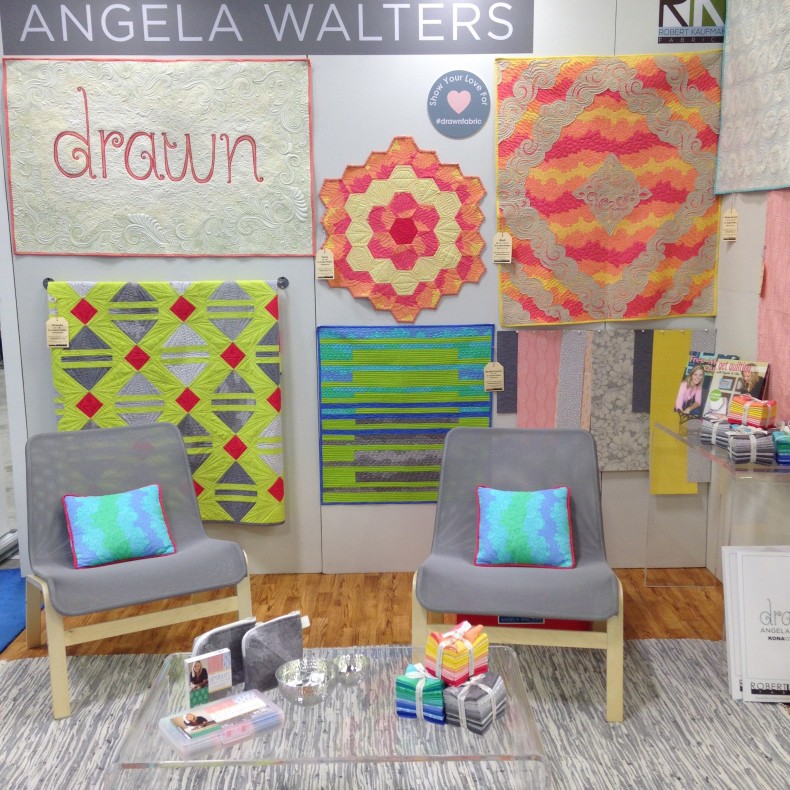 Darlene’s booth was lovely as always, with plenty of great details. 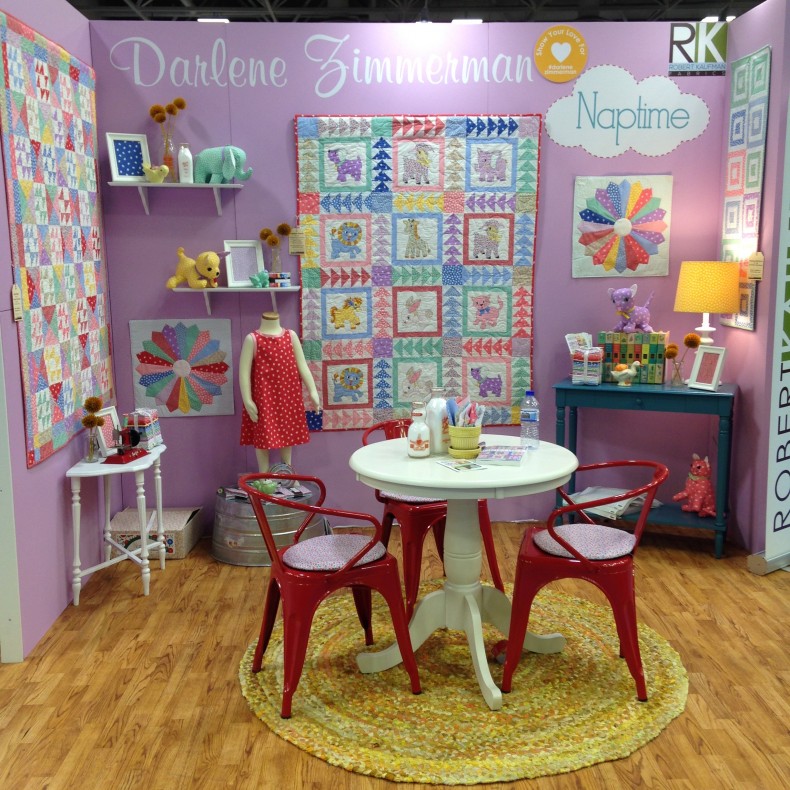 I’m obsessed with this sewing machine. 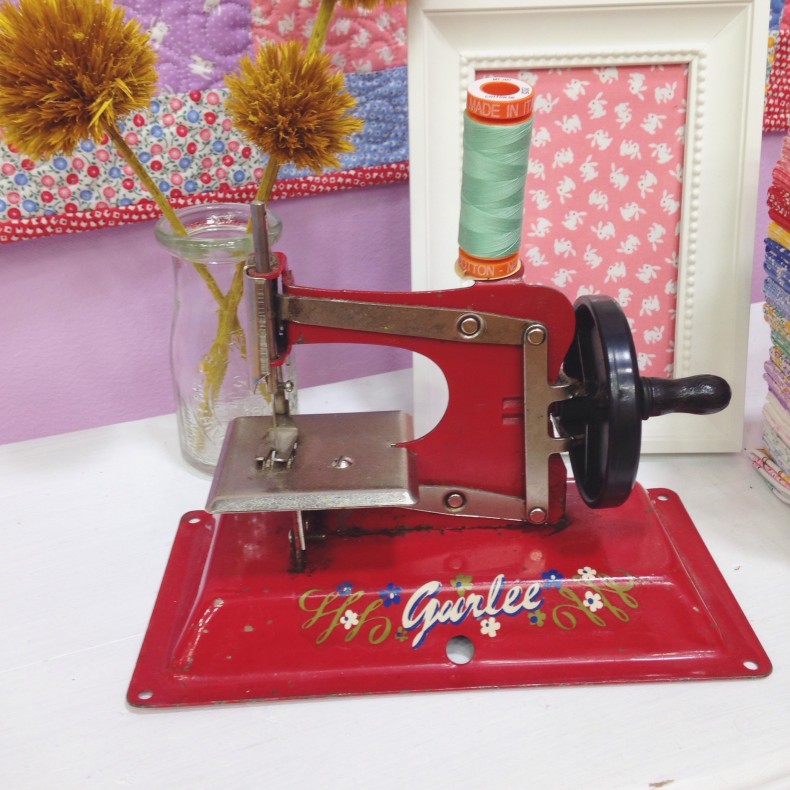 Darlene was even stitching away on some of my blocks during the show. I was totally flattered. 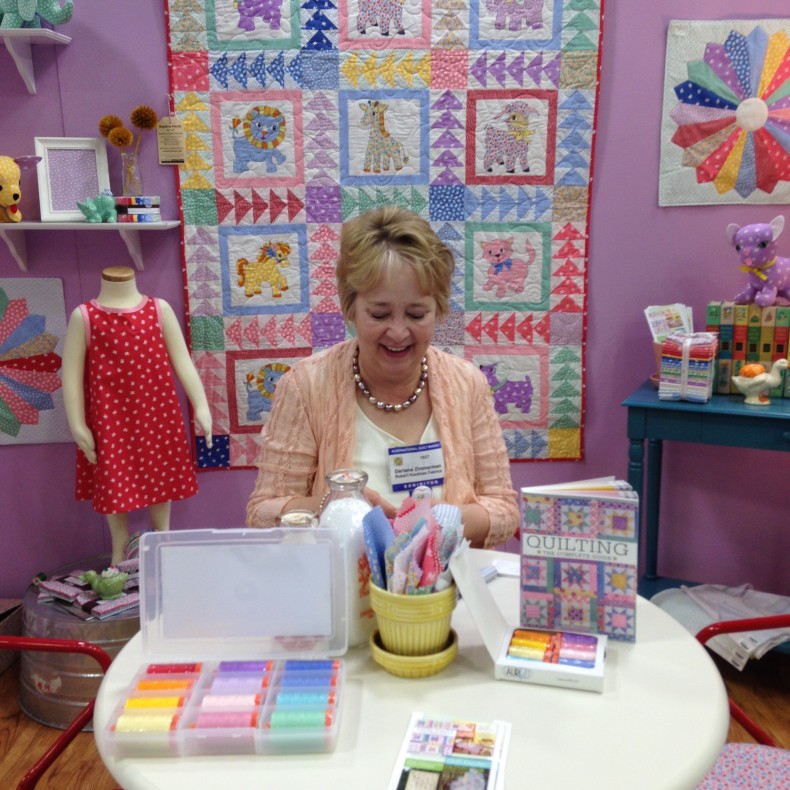 Julia from the Kaufman team kept everything in order at the pre-cuts booth. Plus, she rocked amazingly-handmade garments everyday of the show–including this beautiful Doe dress. 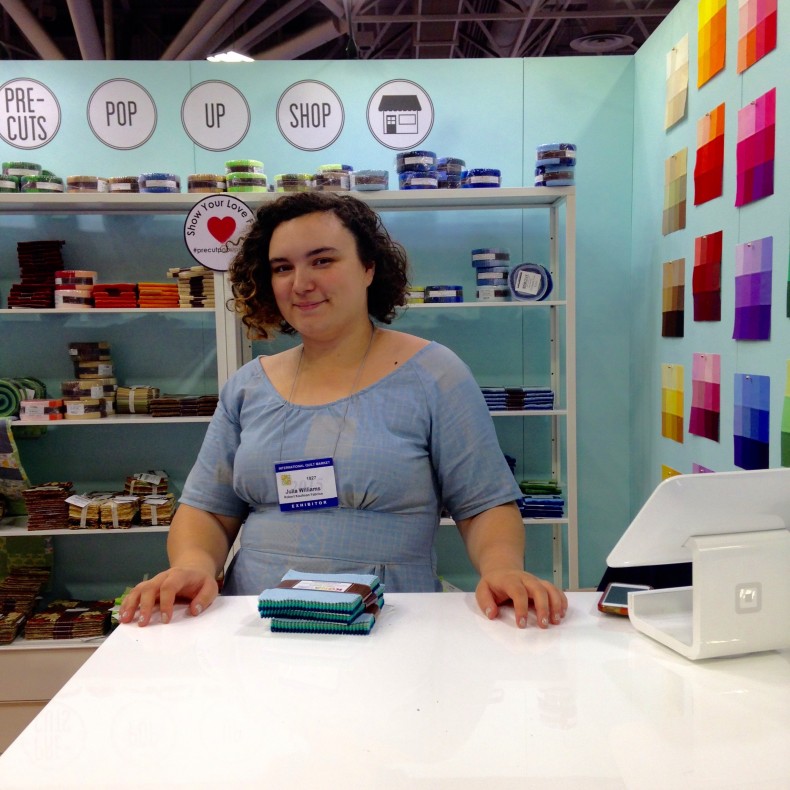 I never take enough pictures, but one of my favorite parts of the Robert Kaufman booth was the sewing studio where they had tons of garments, quilts and other projects made out of their apparel fabrics. It was inspiring to scope through it all and plan out some future projects. Also in that section was a Social Tote, which I did manage to get a photo of. 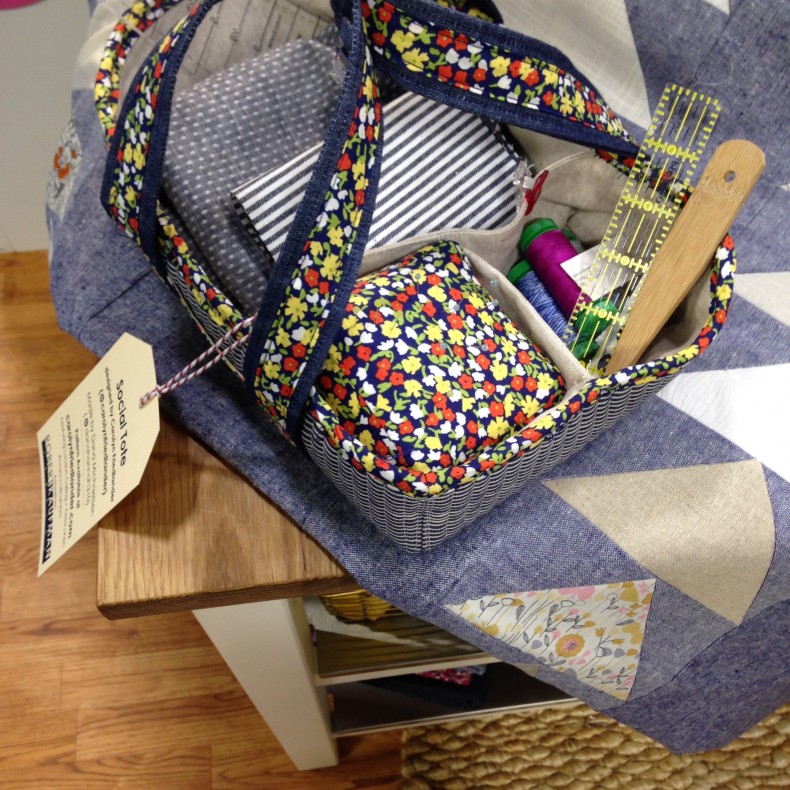 Elsewhere on the show floor… 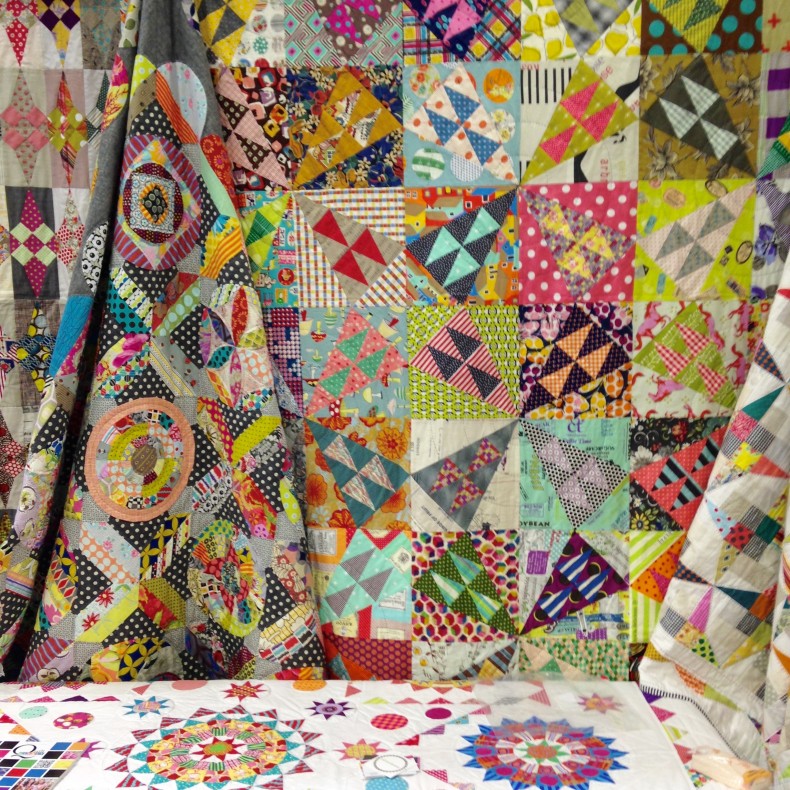 I loved seeing some Nest Egg totes in the Dear Stella booth. 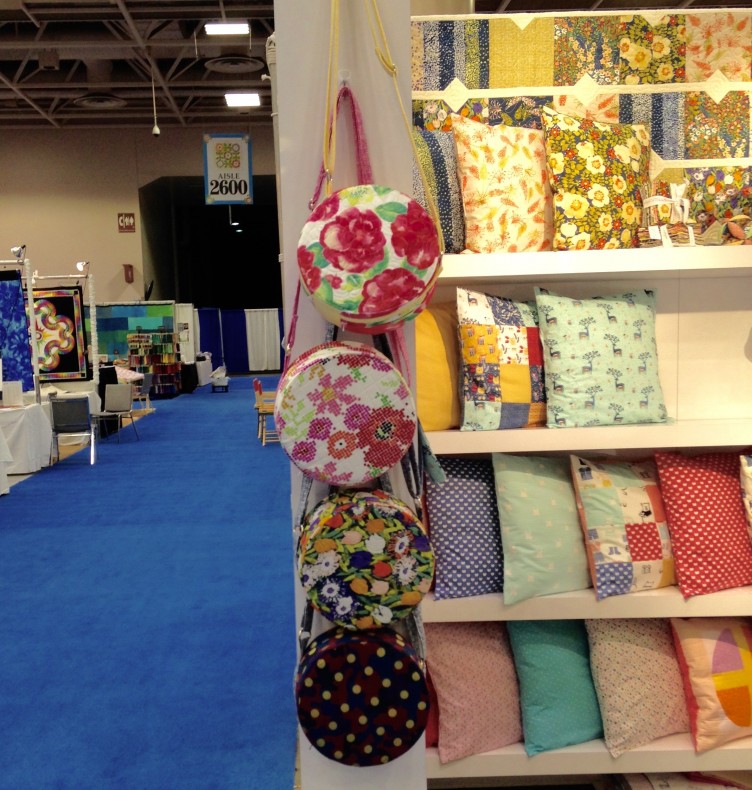 I scouted some Nani Iro dresses that I’d like to make. 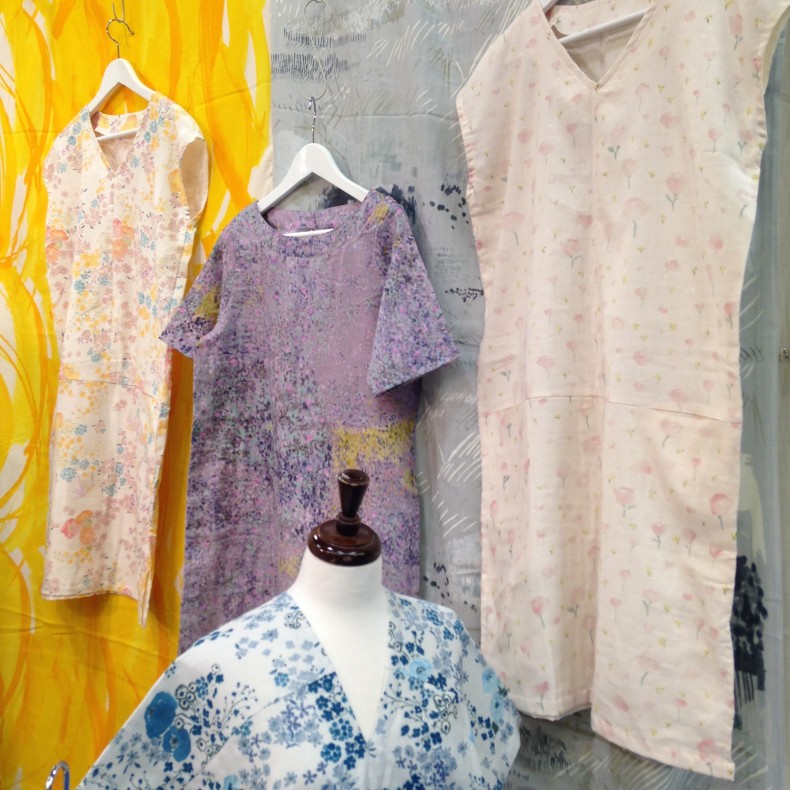 Angela and I traded talents. She taught me to longarm, and I taught her to handstitch. 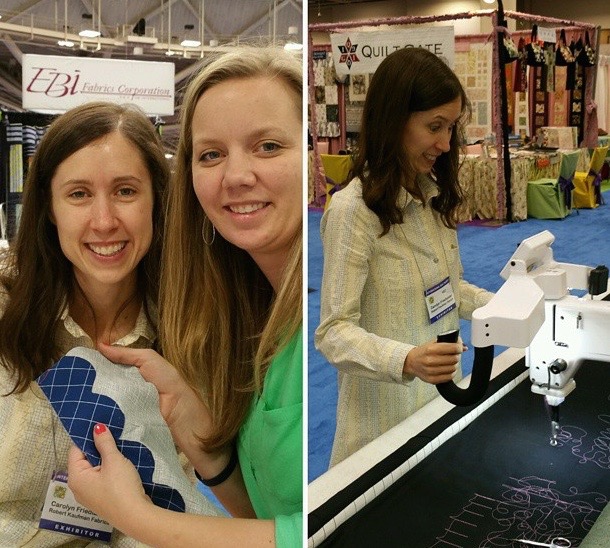 Then Elizabeth, Angela, Valori and I took a group shot with our beastly blow-ups after it was all over. 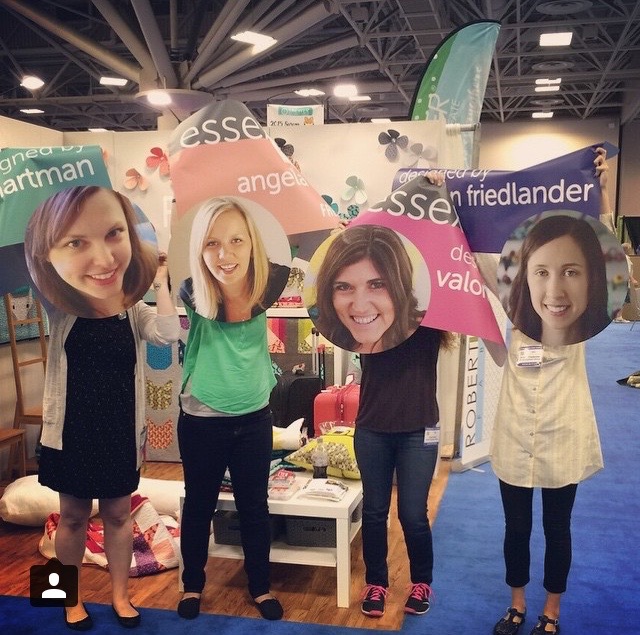