Highlight is the 2016 Kona Color of the Year, and it’s safe to say that I like it quite a lot. It’s a yellow that is exuberant and not afraid. Plus, as someone who is very familiar with a Kona card, this type of vibrant yellow that doesn’t fall on the warm-yellow spectrum but is more inline with the cool-yellow range, is a very welcome and much-needed (in my opinion) addition! Already, I’ve used it in two new projects (actually make that 3, but more about the third later)–Local Quilt 2016 and Blake, a new (free) pattern to celebrate its release.

Local was my very first Block-of-the-Month pattern initially released in the fall of 2012 along with the launch of architextures. It was a massively fun and very personal project celebrating my love of houses, my love of local houses and my first-ever fabric line. Fast forward a few years, and I finally had some good reasons to reintroduce the project. On a personal level, Local has been one of those quilts that I’ve been wanting to make another version of ever since finishing the first one. It’s a project where different fabric choices make such a difference and can be so much fun to play with. Plus, I’d been feeling bad about how tricky architextures had become to find for those looking to make the exact project on the cover. 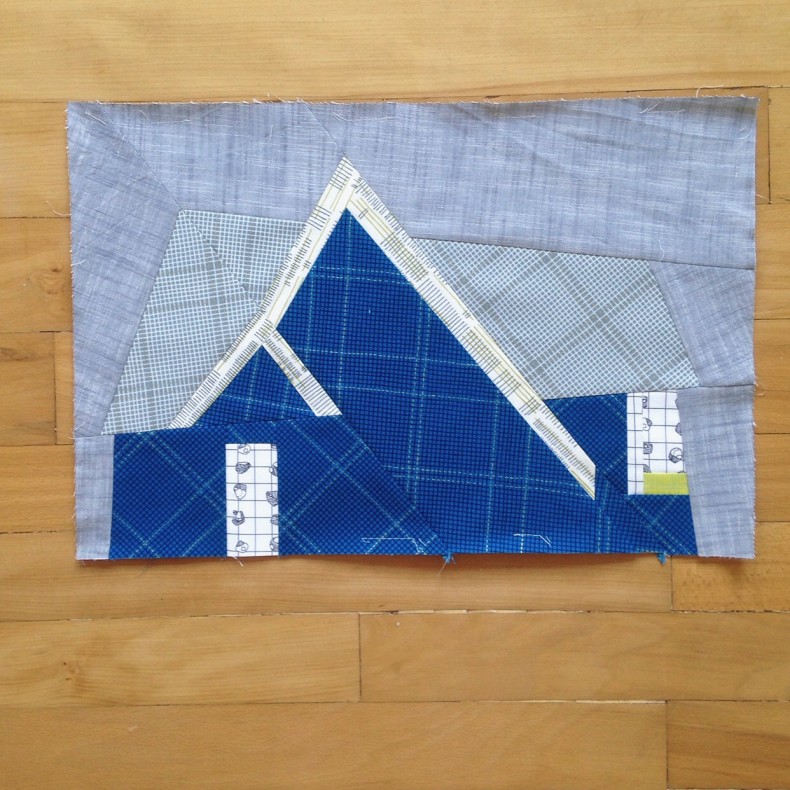 As a result, making a new version not only seemed logical, but also exciting to plan out–especially after learning about the Kona Color of the Year. I immediately knew where and how I’d use Highlight, which was in one of my favorite parts of the project. The ground plane is the part of this quilt that most reminds me of it being like a drawing. Because the ground, trees and plants are united as one color, they read like a section cut (or architectural slice at a specific point). The rest of the palette was built to support that decision. I wanted to celebrate the vibrancy of Highlight by paring it with a textural variety and refreshing mix of blues, grays, creams and blacks. I wanted everything to feel fresh, interesting and still somewhat relaxed. The merry mixture of yarn dyed wovens, checkered ginghams, and my own fabric is exactly the statement I wanted to make. 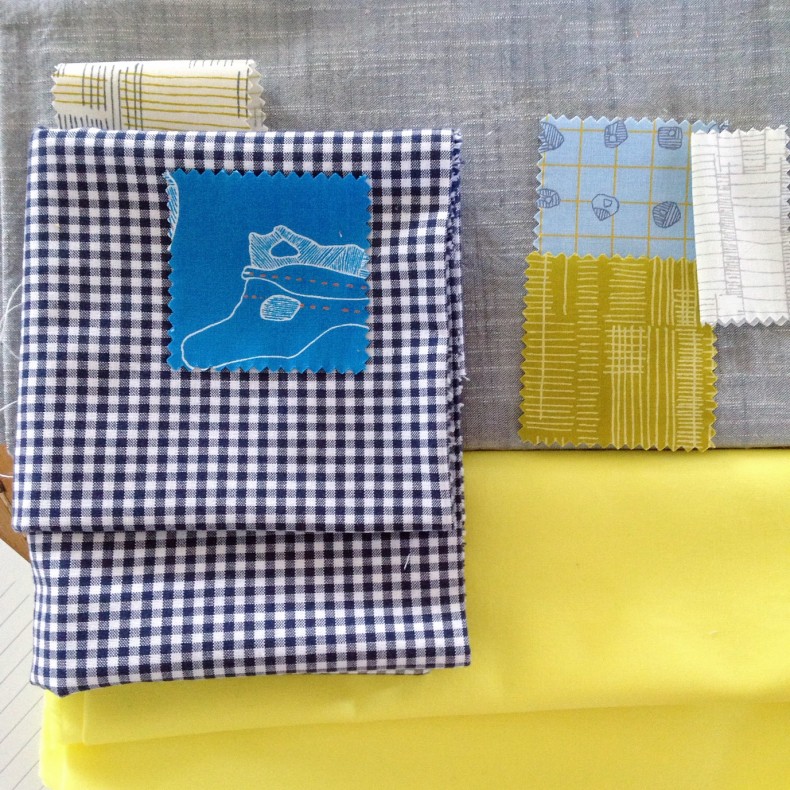 Shifting gears, my next bit of Highlight appears in a new project, Blake, which speaks to my original inspiration of pairing it with gingham, specifically after a coincidental meet-up with this tray. 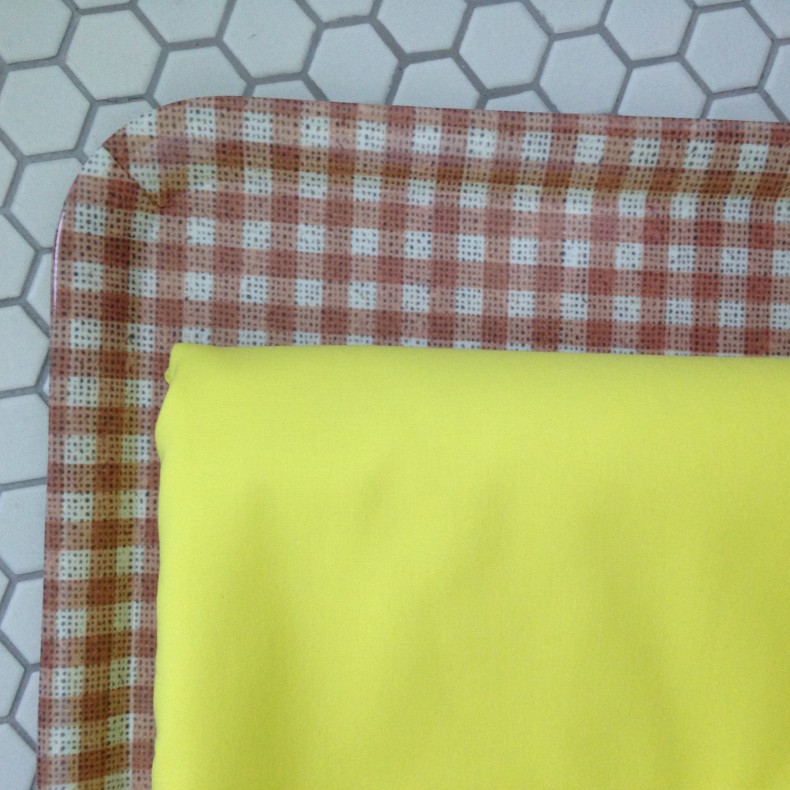 I loved this combo(!) and tried to create a quilt that took inspiration from it. As I worked with the idea, it became a lot about creating and playing with pattern and grids. I actually explored many other color combinations, because I think it is important to note how well Highlight plays with others, but in the end I wanted Highlight to be the focus. After working with the design and playing with the grids, I kept thinking about it harkening back to something a hip lumberjack could almost wear and would definitely own. The name Blake pays some homage to that. 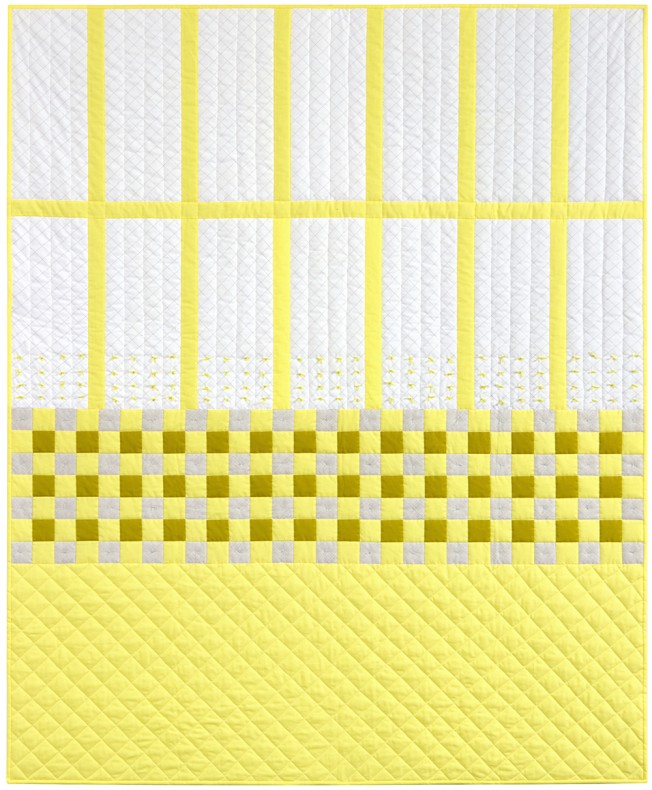 Blake will be a free pattern available on the Robert Kaufman website, and Local 2016 will be given a fresh new cover and slightly updated format before being reprinted and released in my pattern line in the next several weeks. Stay tuned and check in with your local quilt shop.