This was a really fun project. 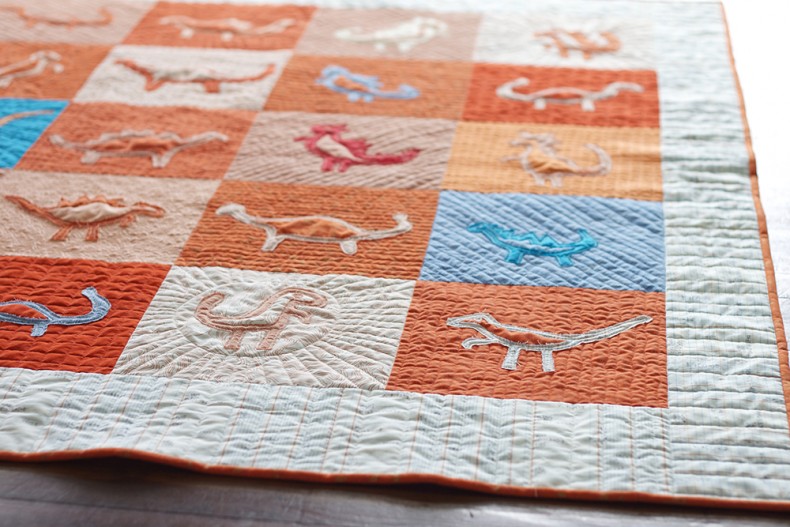 When Cheryl approached me about participating in her next book, I didn’t hesitate too much, because I was intrigued by the premise, which was to find someone to inspire you to make a quilt. My choice was easy–my 3-year-old (at the time, now 4 or “almost 5” when asked) nephew, Jacob.

Jake sews with me fairly often, and I knew it would be a creative challenge for me to be totally open to whatever his request would be. Coaching him into an answer wouldn’t have been interesting or a challenge, so there was no letting him in on the secret until we had our skype interview with Cheryl. At that point I asked Jacob what type of quilt he’d like me to make for him and without hesitation he said that he wanted a dinosaur quilt. Actually, I think he said Tyrannosaurus Rex, which seemed a little specific, but I was just glad he didn’t say something like the Green Lantern, which he’d ask me to draw a week prior to the interview. I had no clue who the Green Lantern was (still don’t really know now…), but my green stick figure wasn’t cutting it for him. Dinosaurs, we could handle.

So, we started off drawing and painting a couple of dinosaurs. It was a team effort. 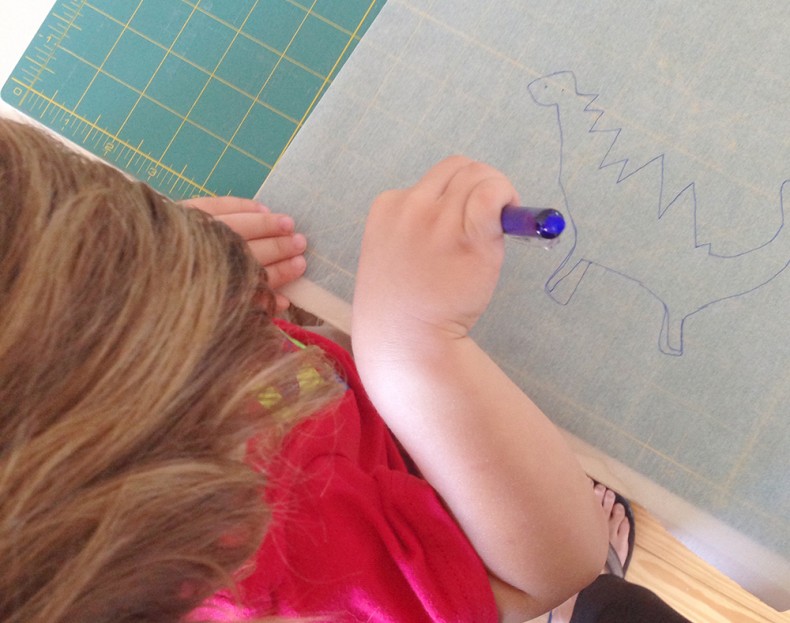 Then I let him pick some fabric–orange and blue were speaking to him–which, whew! They speak to me too. 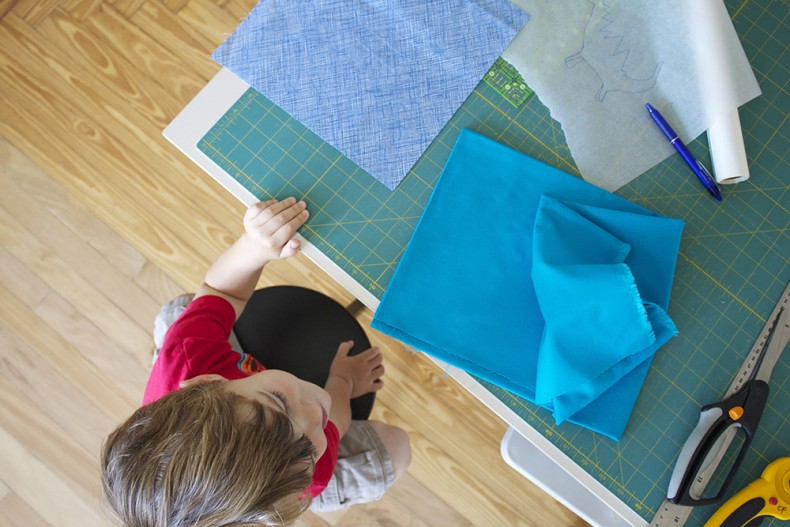 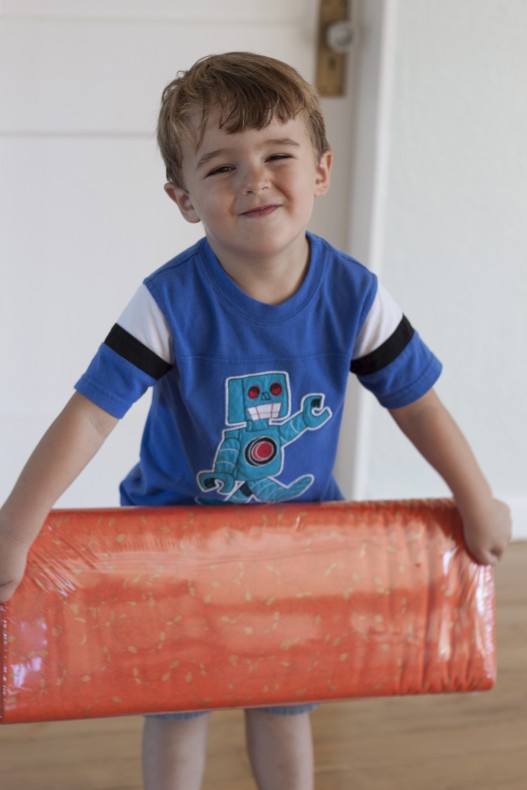 He helped me sew one of the blocks, but his attention span was wearing thin, so I took it from there.

But he (quite literally) jumped back in when it came time for the layout. (Or, quilt hopscotch?) 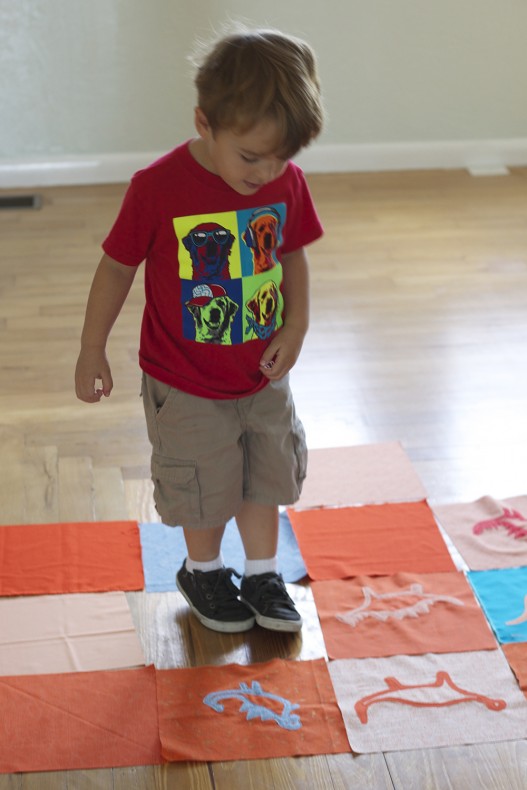 What I ended up doing was to take the couple of paintings and drawings that we created and use them as a starting point for some raw-edge appliqué. Originally, I had the idea that it would be a big dinosaur, single-motif kind of thing, but when we started drawing, I loved the idea of it becoming a collage of drawings–almost like a refrigerator gallery of blocks with plenty of personality, texture and color. (Not too different from my nephew or most kids…) 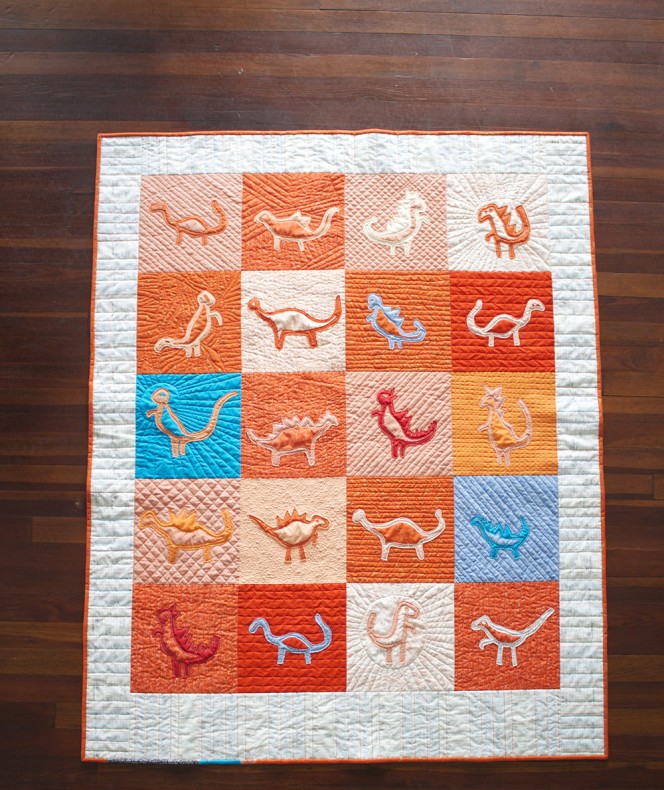 That entire process is outlined in Cheryl’s new book (found here), and this pattern would be very easy to adapt to any other motif. In fact, I would love to see other kids’ refrigerator drawings turned into some quilts. 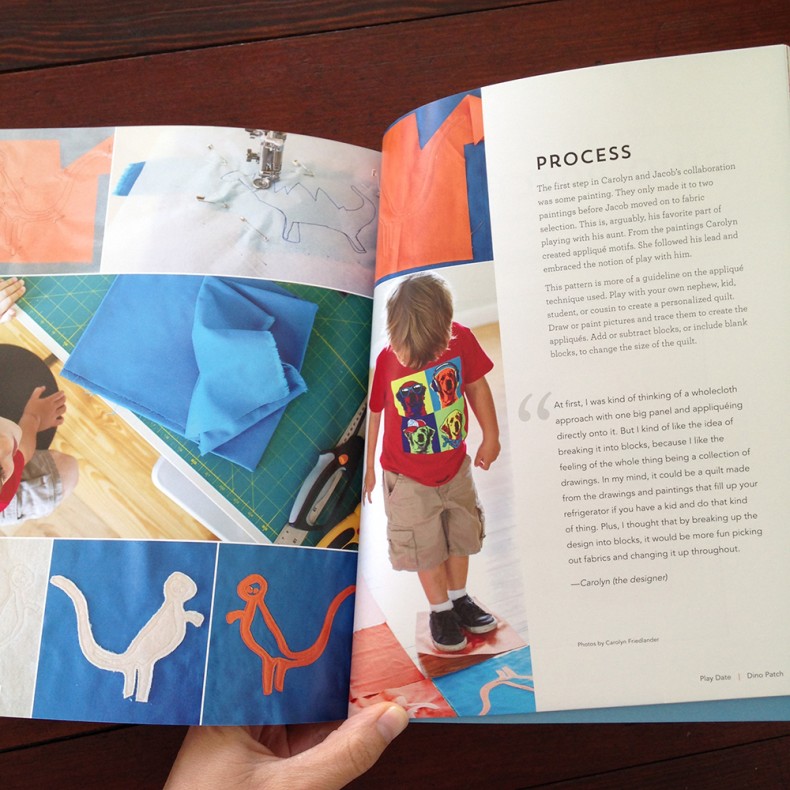 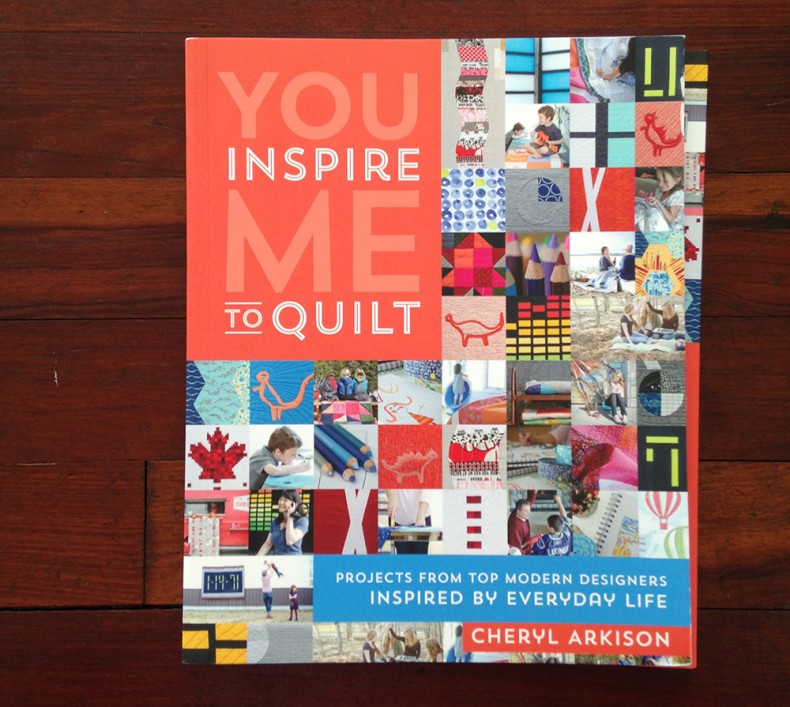 The downside to making a project for Jacob that would be in a book was that I knew it’d be tied up in the publishing process for at least a year before I could give it to him. I could only hope that he’d still be liking dinosaurs when I’d get it back.

I finally got the quilt back just before Quilt Market this year, and I decided to wait until after the show to give it to him. So last week I did. Jake was pretty excited about it, but mostly impressed that the quilt, he and I were in a book. (“How’d you do that?!” he asked.) The person who surprisingly showed more enthusiasm for the quilt by dancing on it before I could even fully unfold it, was Jake’s now 16-month-old brother, who was only an infant at the time of the first interview for the project. I guess I’ll be making one for him next… 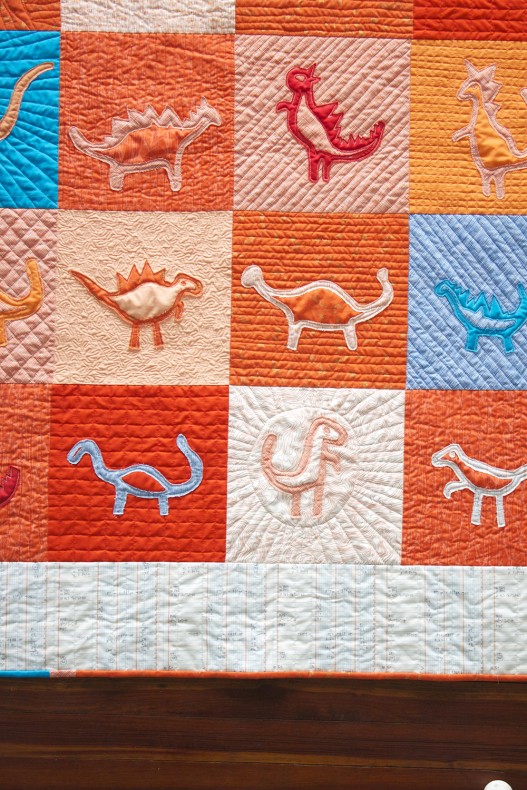