When I was in Australia, I picked up a great top at a local clothing store. (It’s not pictured on their site, but I found some shots here and here). I just love the shape and style and have been wearing it often. Because of that, I thought it’d be fun to try to recreate it so I’d have a few more. 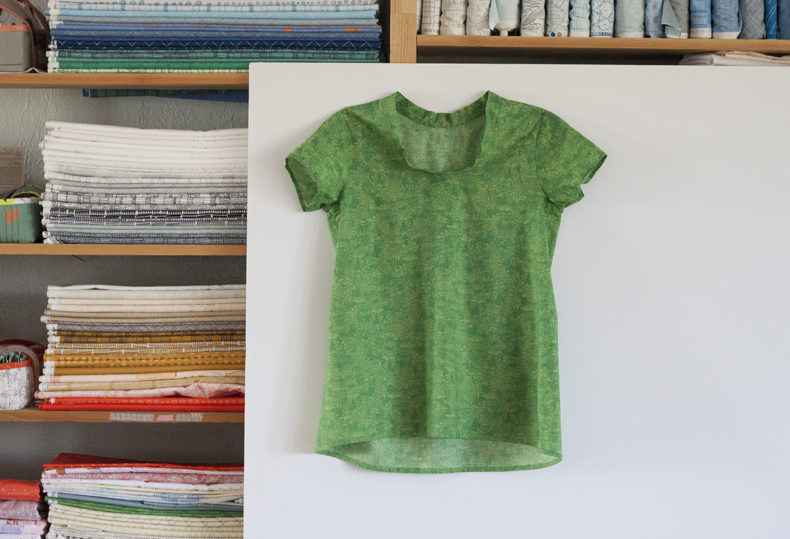 Lucky for me, the Scout tee by Grainline is a great starting point. It’s a project that I’ve made many times (one version is here), and each time I make it, I tweak things here and there to customize fit and/or style. That’s the beauty of finding a good pattern. It can give you much freedom to try new things! 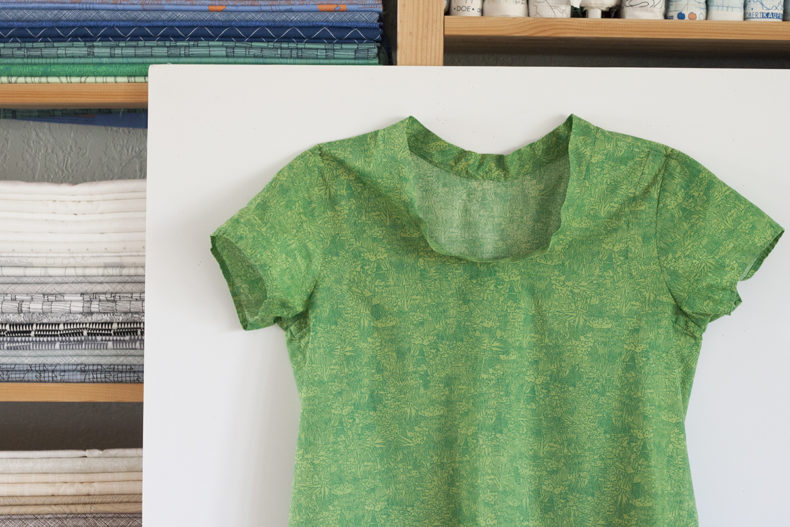 This first version stays pretty true to the Australian inspiration in that it has a wider collar, curved hem and some billowing fullness dropping down at the sides. 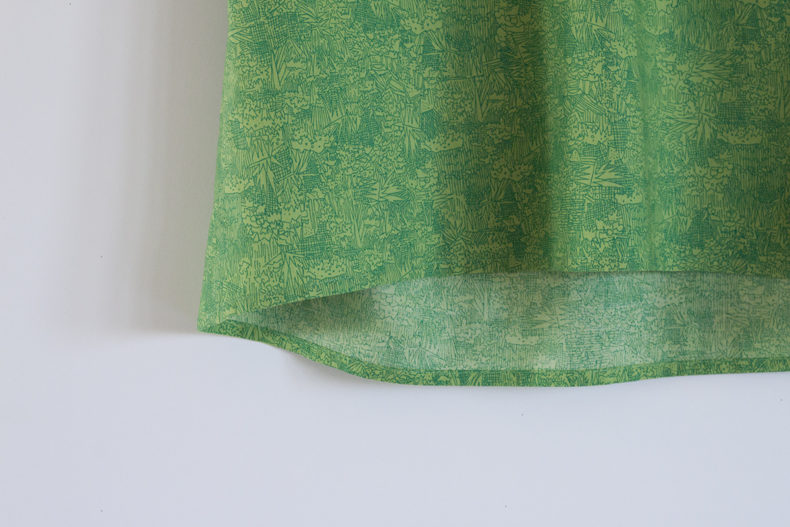 To make these changes, I added width to the sides–both to the front and back tapering out from the bust. I also added length to the hem so that I could curve it, and then the neck band was a relatively easy add. I roughly went off the thickness of the inspiration piece, cut a new band on the bias and installed it. 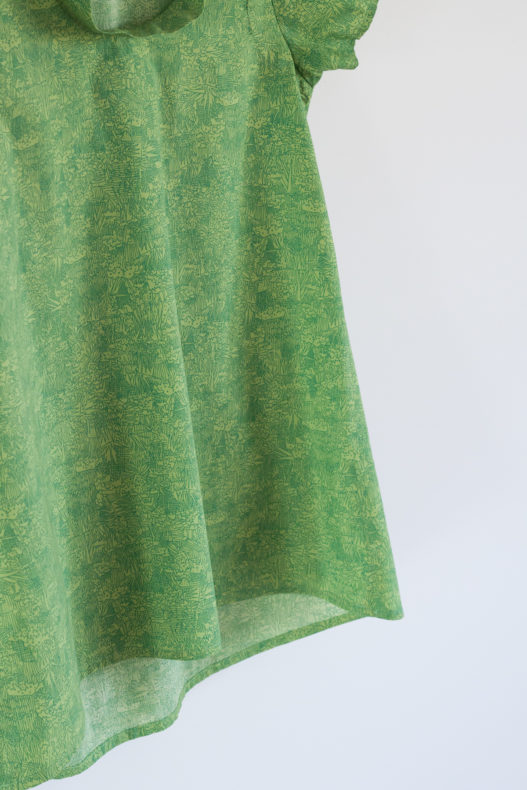 The Australian original is made from a sturdier cotton, but this version is much lighter. Lawn tops are pretty great (I might be obsessed), and I’d been wanting to make a top out of this green print from my latest collection. The result drapes nicely and will be perfectly cool and appropriate for the summer. 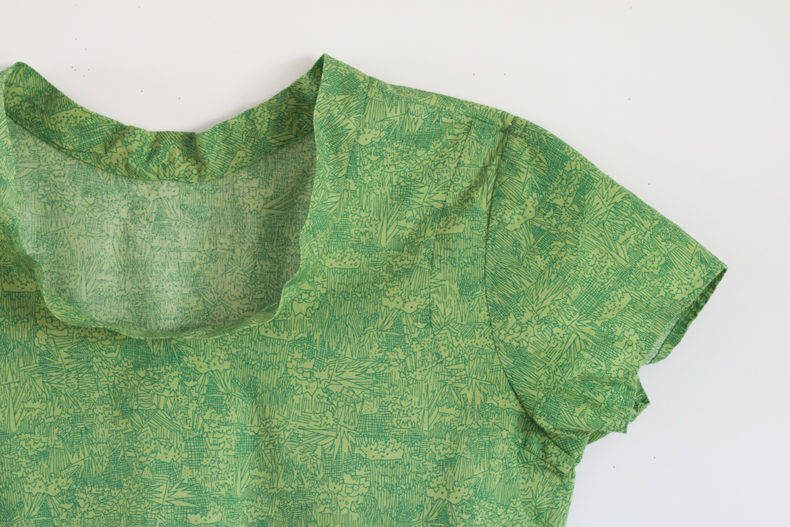 The original also has some neat seams by the shoulders that I had a fun time drafting into the Scout. Using this particular fabric doesn’t make it very pronounced, but I could see playing with more contrast in a future version if the mood should strike. 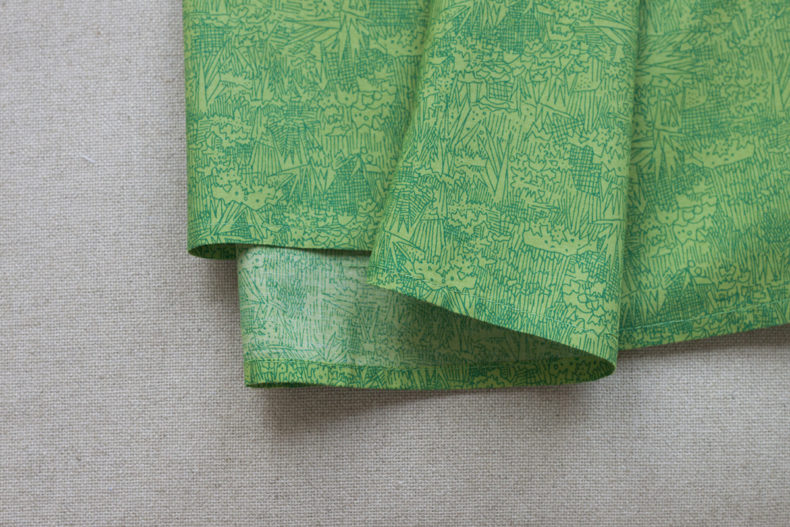 The next version has a few other design tweaks. 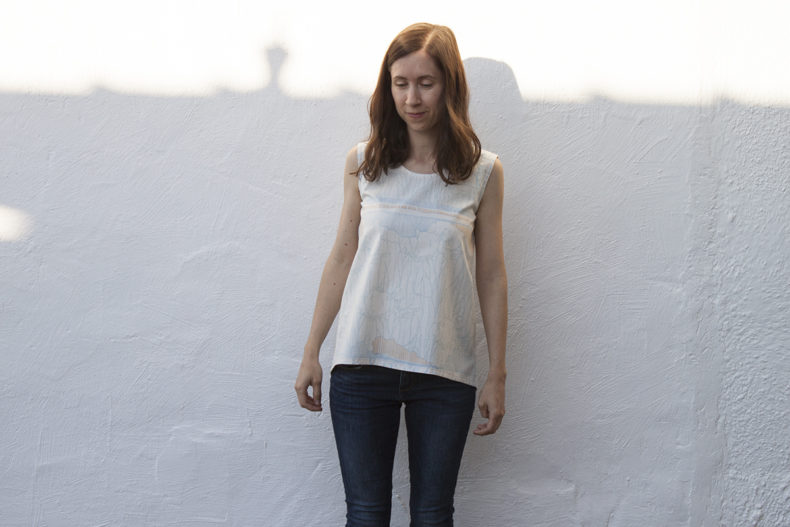 And I’ll admit, this was kind of a compulsive sew. I was eager to make a shirt with the big tree stripe from my latest collection, using the stripe as a fun element in the bodice. 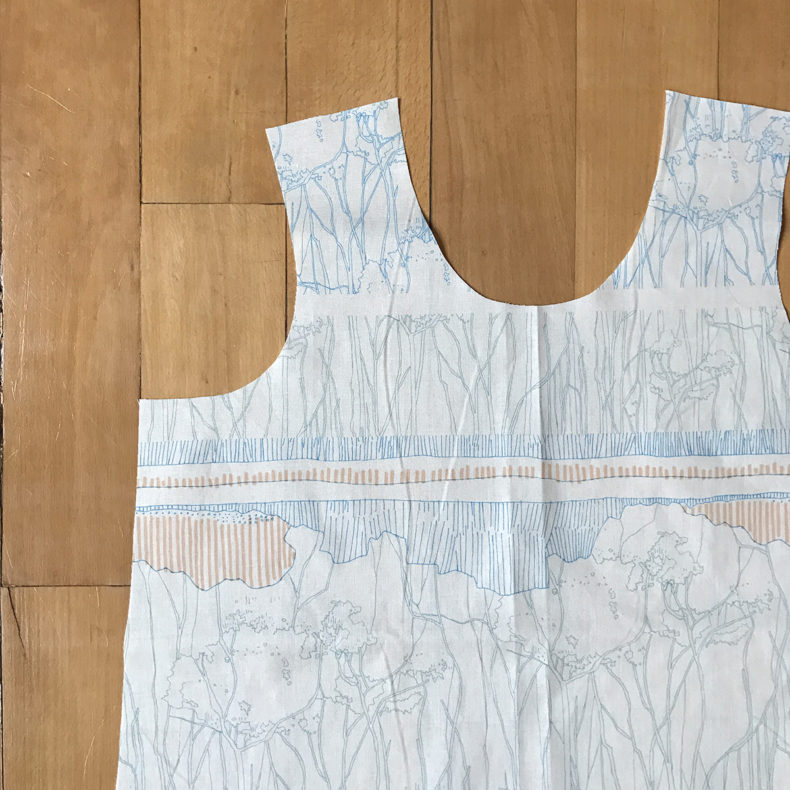 I also decided to make it right before leaving for QuiltCon this past February. (There’s nothing more fun than being able to pack a new garment for a trip!) 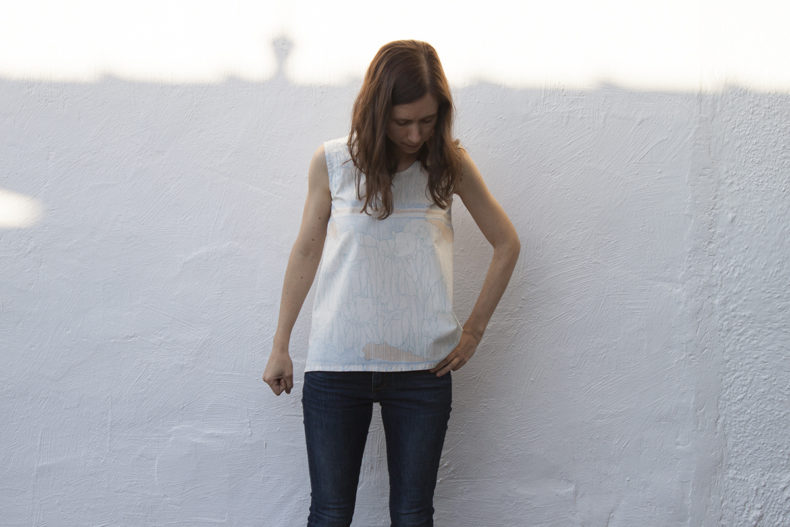 Again, I started with the Scout tee, making the adjustments to the side seems and length. When it came time for sleeves, I decided to omit them. Sleeveless is perfect for Florida, and it’s also easy to layer with a cardigan. 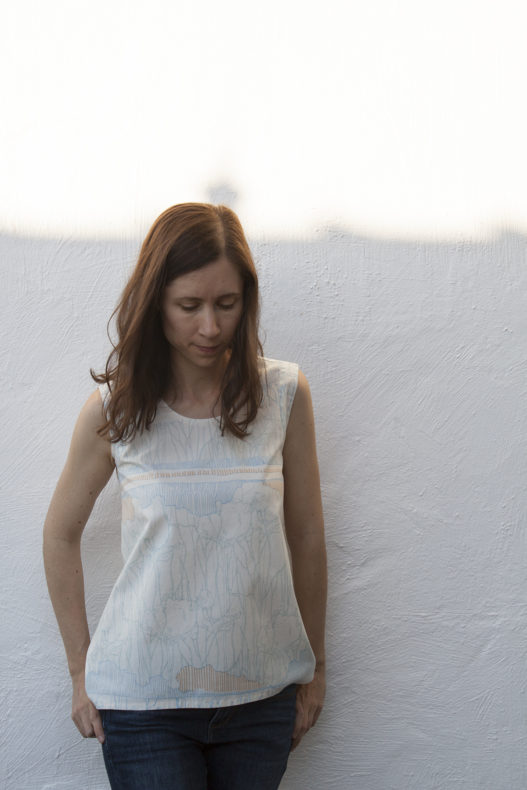 After some debate, I decided to not do the collar on this one. I liked the idea of the print being front, center and unencumbered by much else. 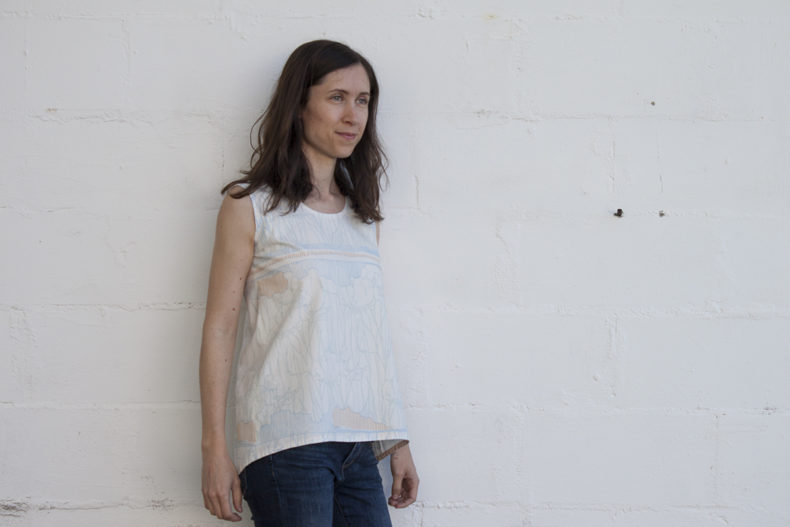 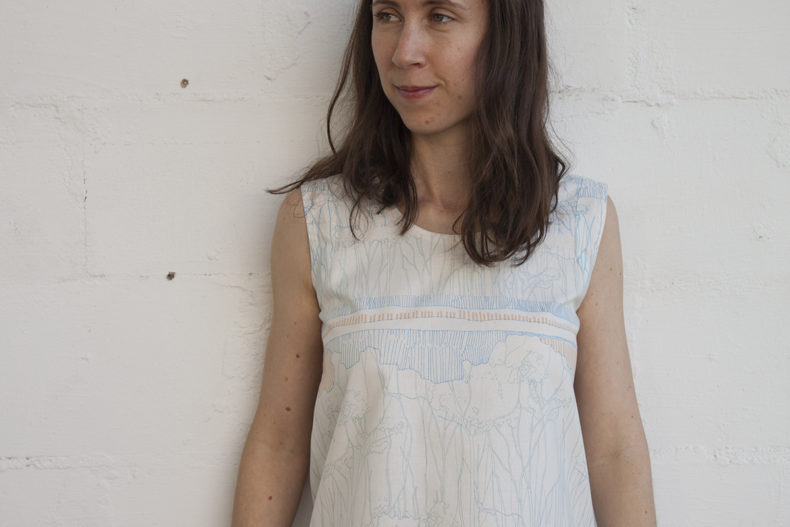 The hem, arm and neck openings are finished with bias tape. When I make bias tape, I often make more than I need so that I always have some on hand. Here I used some from my stash, and it worked perfectly. 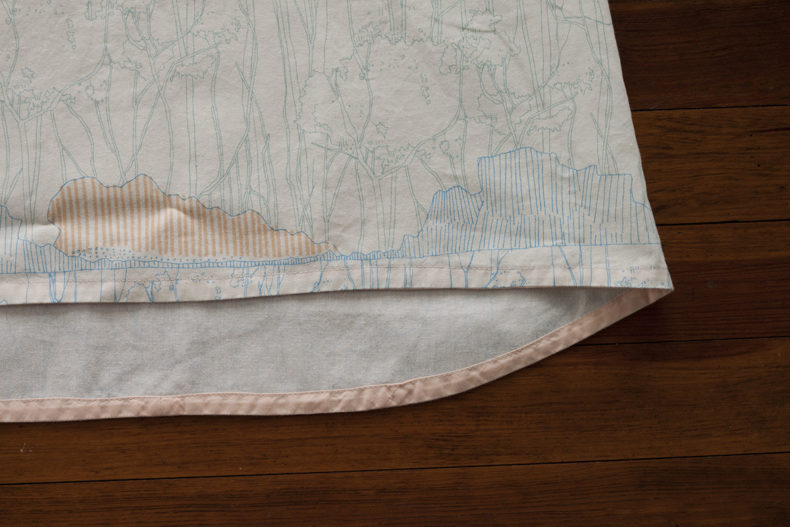 I kept the additional shoulder seam and played just a bit with the part of the print that I used. It’s a subtle detail that adds that little extra something. 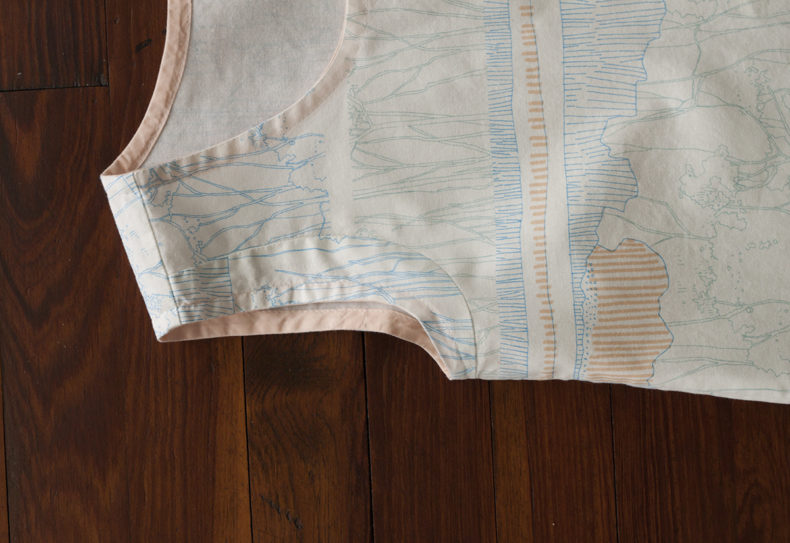 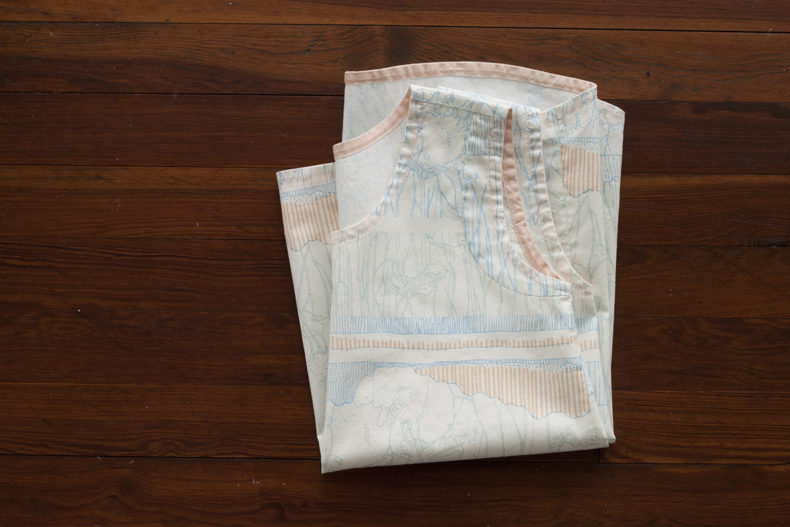 Inspiration : This shirt from Vic and Bert, via my travels in Australia

Pattern (with some adjustments) : Scout Tee by Grainline