Yay, I’m so glad that you’re joining in! And I’m really excited to hear that many of you are happy about the year-long format. It’ll be good!

This week I’m doing a bit of an overview, and I’m going to show you some different ways to think about the project. I always love a project that can be translated in different ways, and Hunt fits that calling perfectly. 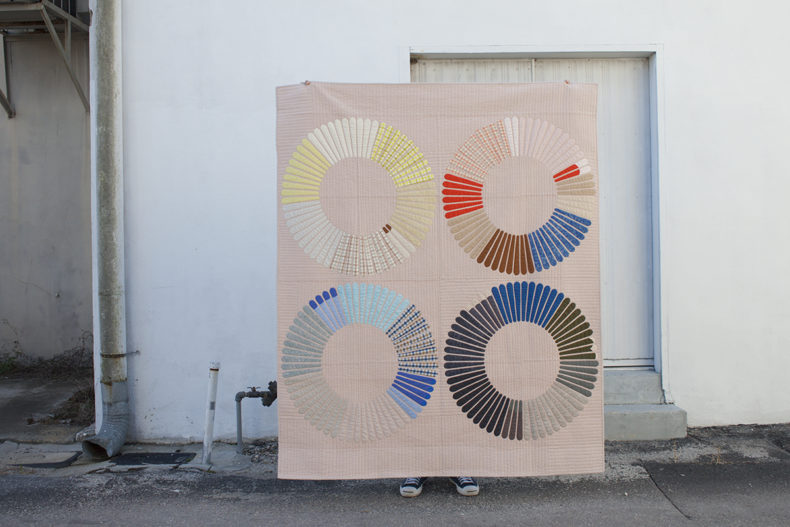 It (more here) is a celebration of color and texture, and it also shows the idea that you don’t have to treat every piece the same. In addition to using many colors, prints and wovens for the appliqués (or cut shapes), I fussy cut different sections from the scallop print in Harriot to add interest and variety to the shapes. Here are some that I cut first, before auditioning in the project. 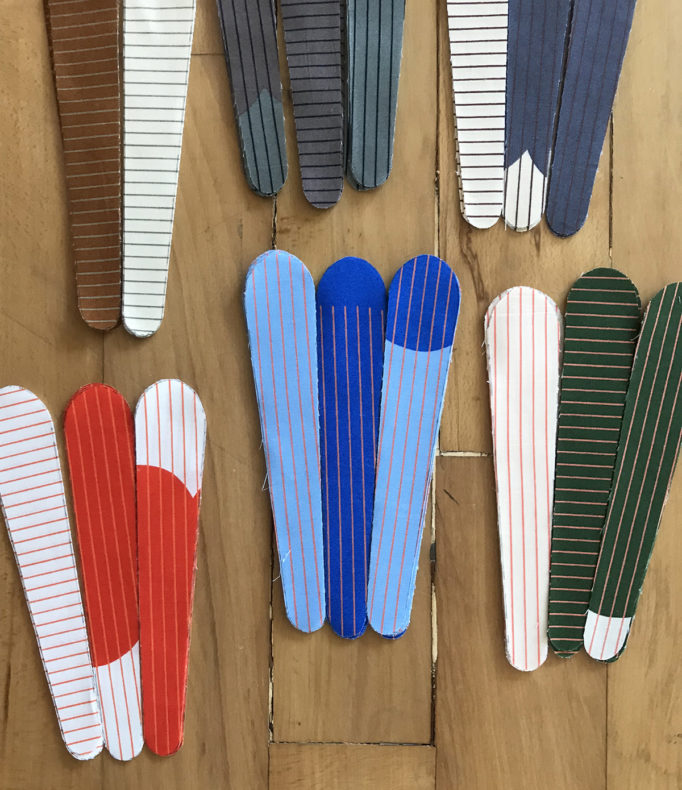 Although I used many different fabrics for the appliqués, I used the same fabric for the background. I feel like that makes the different colors really pop. 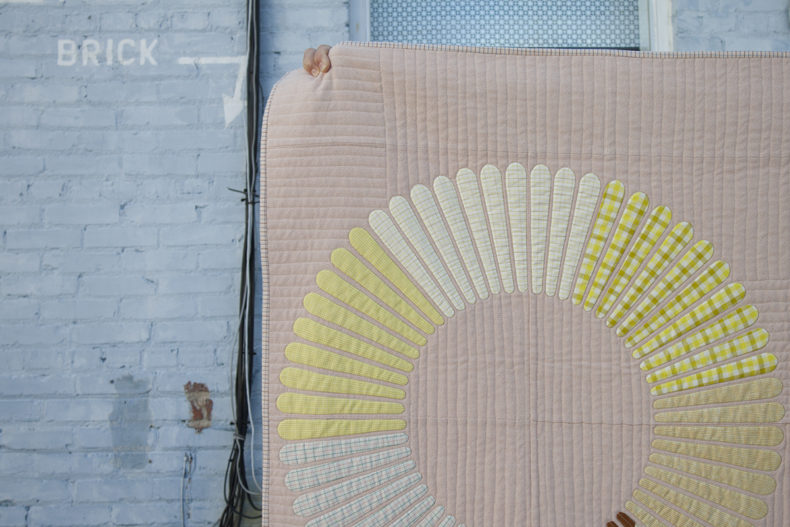 There’s also this one that you’re familiar with. 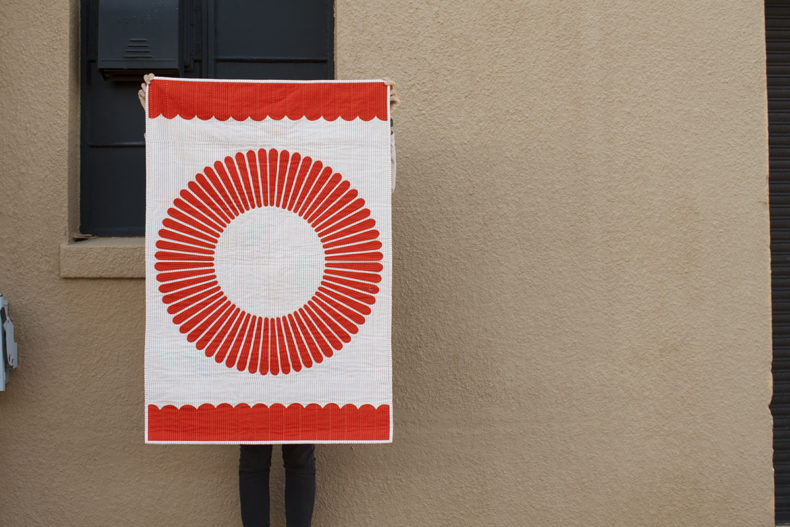 In contrast to the previous example, this version only features 2 colors–and actually just one fabric (see here.) With a 2-color project, you can see how much of a visual impact you can make.

Another 2-color example is the vest I made using Hunt. 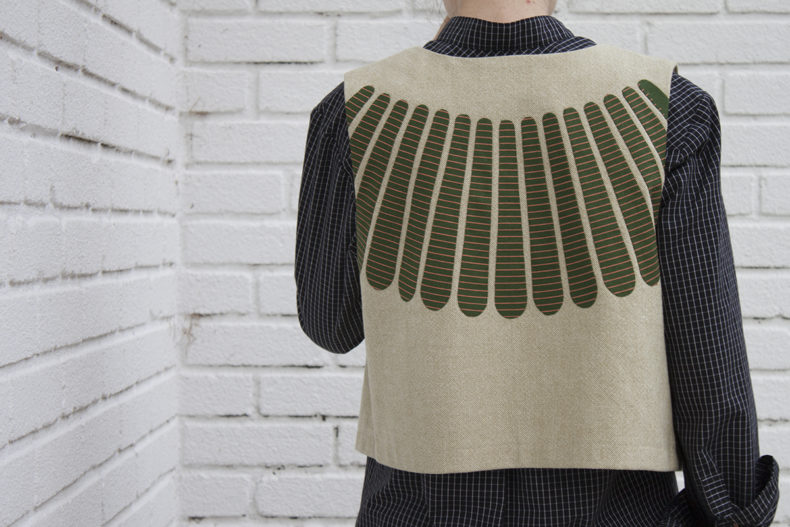 You’ve seen this before too, but it’s a good thing to bring up, because I want you to see that you don’t have to think about this design as only ending up as a quilt. These motifs can thrown on just about anything–clothing, bags, whatever!

As a little bonus, here’s a look at another idea I explored early on. 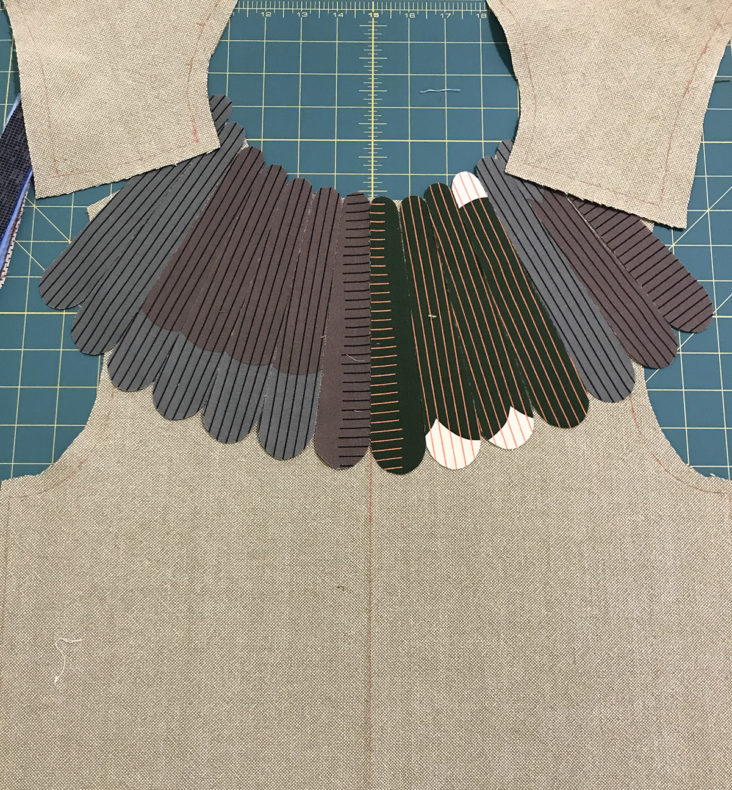 In addition to a 2-color direction, I also considered mixing it up and using different fabrics for the appliqués on the vest. There was also some play with the placement, but what a different look!

First up is a block using my newest fabric. It’s a block from when I was considering making a Hunt sample for the release. I ended up focusing on other things, but here it is. The new collection is all dark and moody, which I thought would set a neat tone. As far as the layout was concerned, I imagined using different 2-color fabric combinations within each block. This would give you another effect, and I’m still intrigued by the idea. 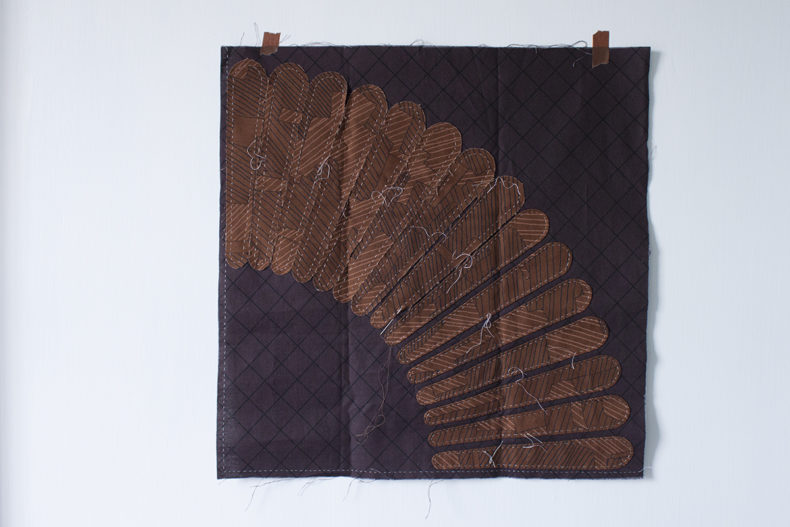 On a side note, while basting this project I was reminded of how much I enjoy this part of the process. It’s repetitive, satisfying and very relaxing. At the end of a long day, this is the perfect thing. 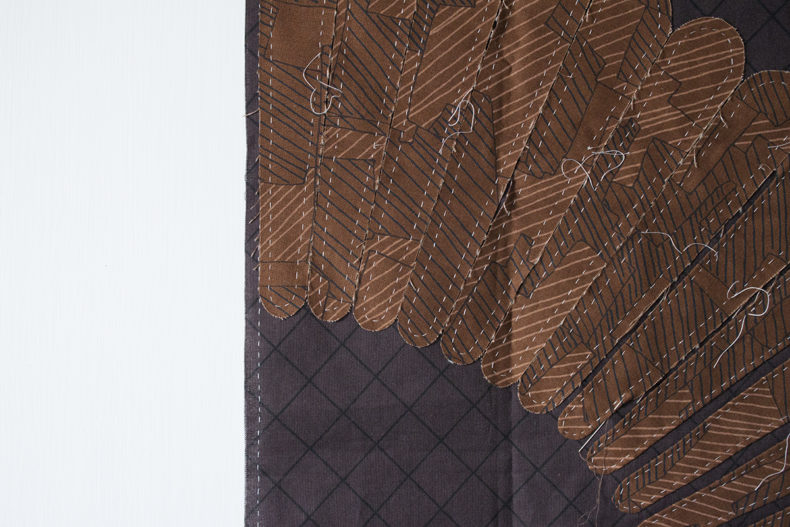 Another example in quilting cotton is this block that started as a demo piece for Quilt Market last fall and has stayed a class demo and sample. In terms of color and fabric, I’m sometimes drawn to combinations that are not always high in contrast and can speak to a theme. The blues in these fabrics are similar-ish in value, but the shades of them are pretty different. It almost clashes in a way that I really love. 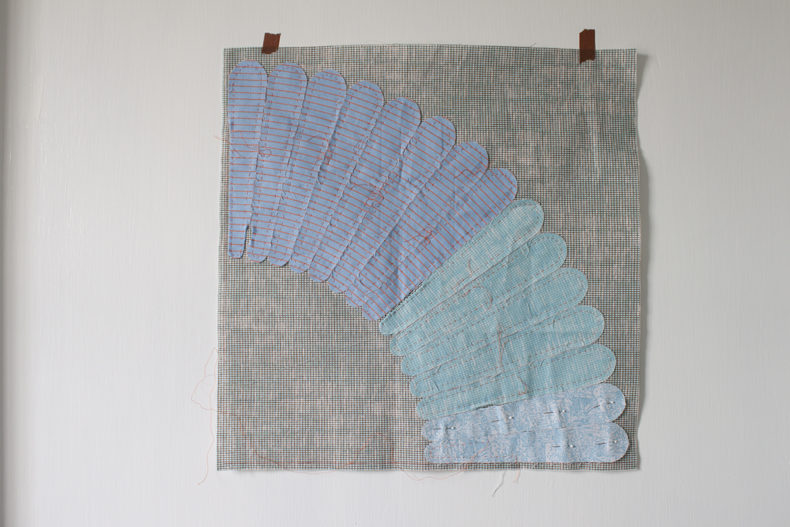 Plus the prints themselves (mostly from Harriot) play off of each other in a neat way. Lines and grids and texture are all coming together.

This one is a great example of how awesome it is to see the shapes separate and start to define themselves as they get turned under during appliqué. I love this reveal between the shapes in this pattern. I really want to see this one appliquéd! 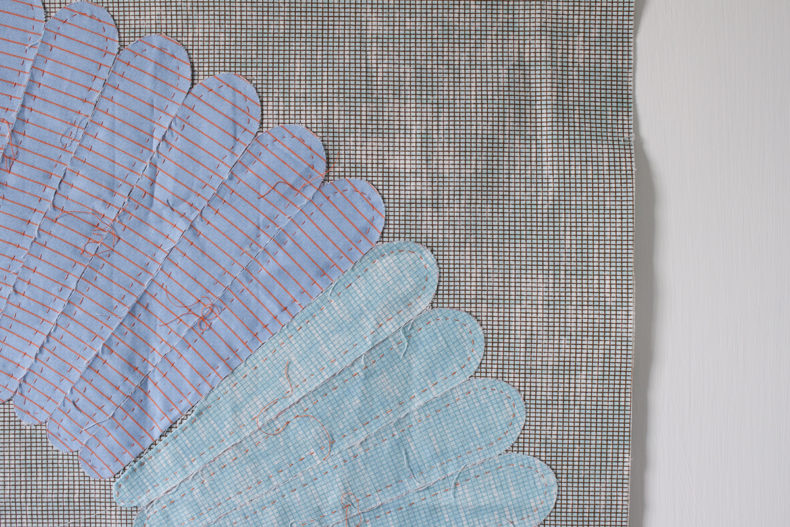 Here’s another block made from quilting cotton. This one was my very first tester block when I was playing with the motif. It too doesn’t have a ton of contrast in terms of the fabric that I chose. It’s soft and subtle. One of the fussy-cuttable motifs from Friedlander was fun to cut up and use. 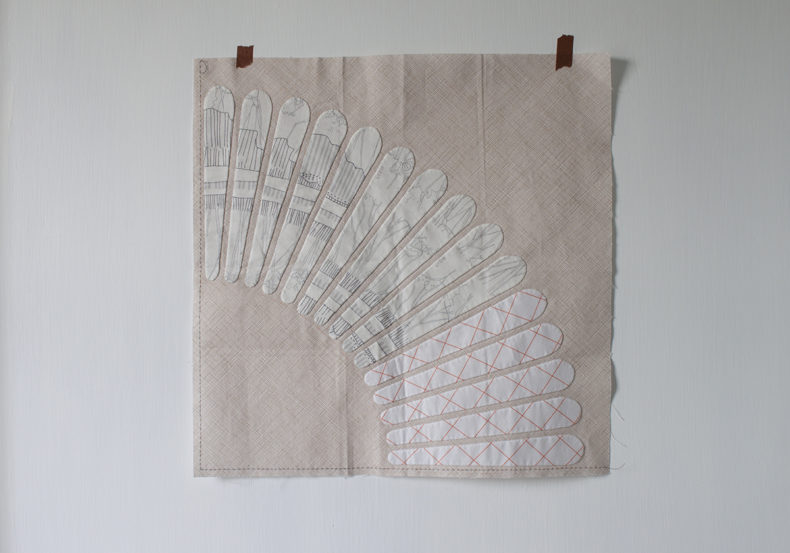 As a general note, working with quilting cotton will be the easiest place to start with this project and with appliqué in general. 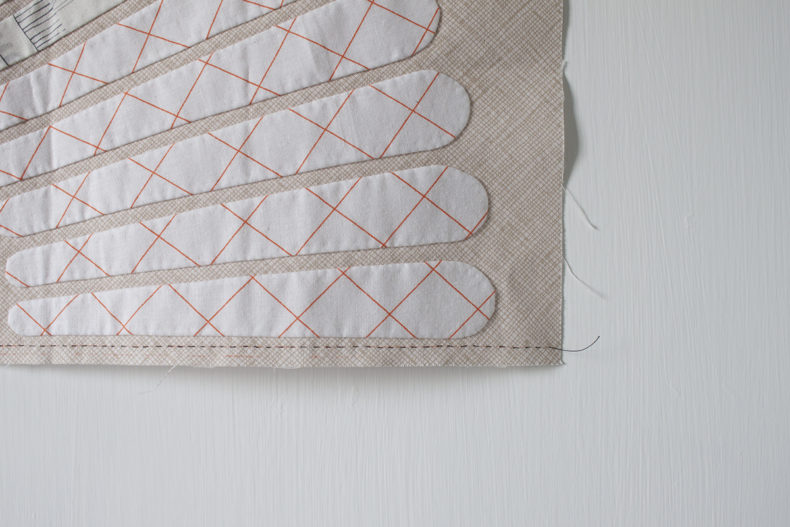 Now for some other technical approaches!

Here is a raw-edge, fused and matchstick-quilted sample that I made to show off some other ways you could take this project in terms of technique. 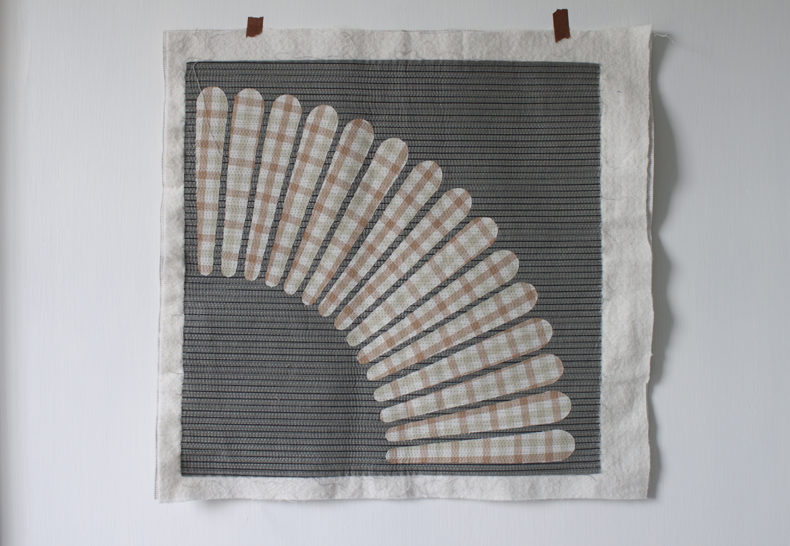 All of the shapes were first fused to the background, then layered with batting and backing, and lastly quilted with lots of straight lines close together. This is a totally different approach, and it has a really nice effect.

In this case, you’d cut your shapes from the template without seam allowances, because it’s raw edge, and you’re not turning anything under. 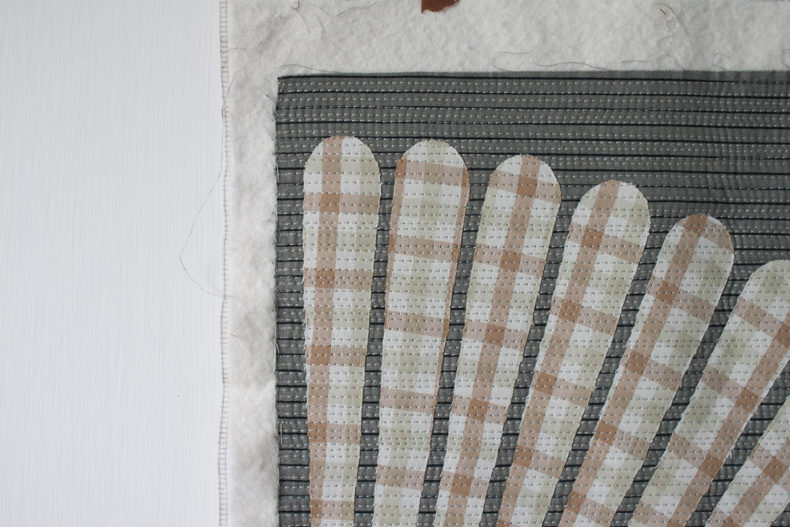 You can also mix techniques in the same project and even in the same block. Here I appliquéd some of the shapes normally (on the background panel), and then I sandwiched it together with batting and backing, and have started quilting in the motif. 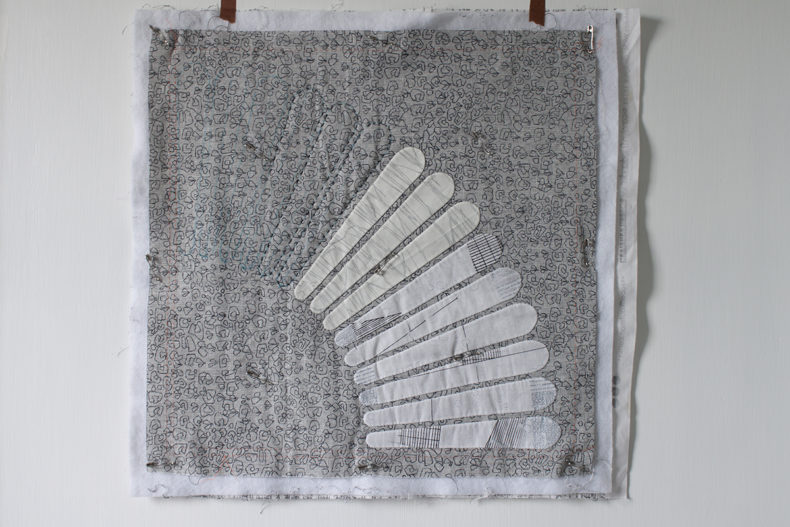 I’d love to see something like this played out across multiple blocks together. I think it could look really great! 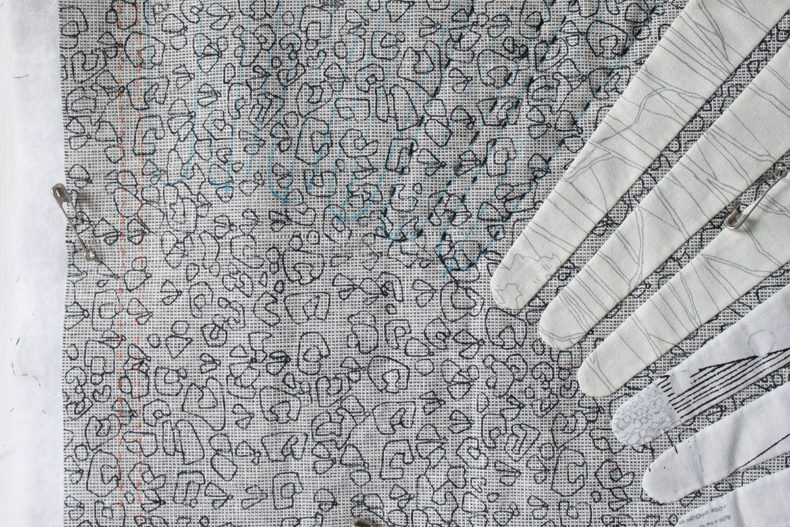 This panel is simply embroidered (with my favorite bright orange embroidery floss). (Although, not finished, yet…) 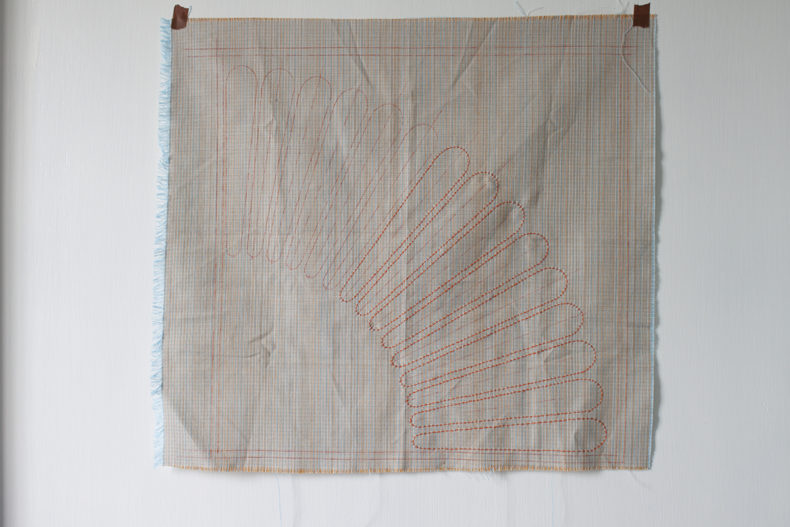 Simple idea, but it’s another great way to explore the motif. (You’d use the seam-free template here too.) 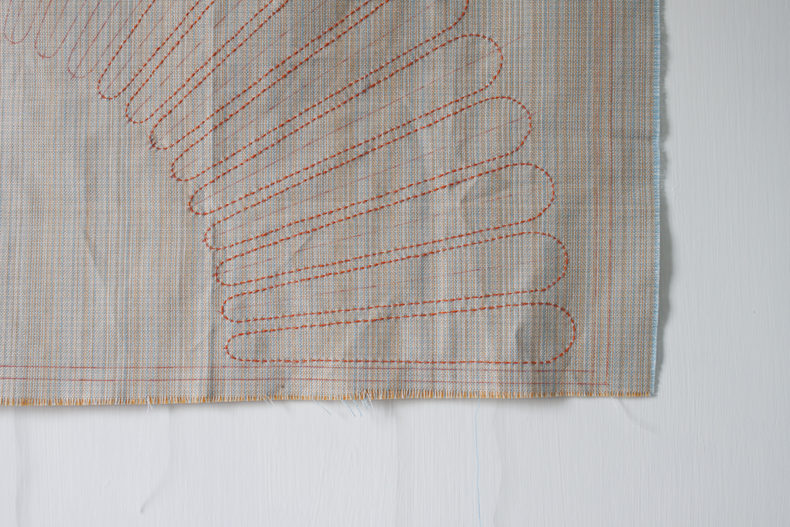 Wholecloth is also a possibility. Pick a plain fabric or one with something going on–either way, I think it could be a neat direction to go. 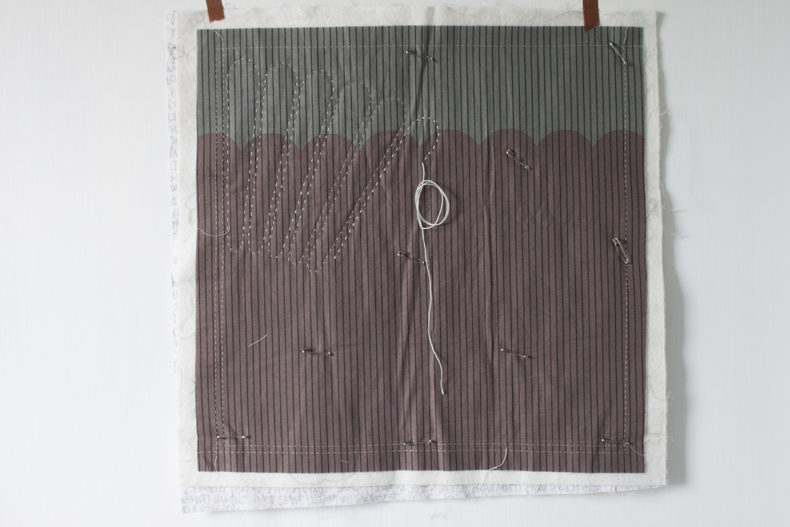 (This would use the seam-free template too.) 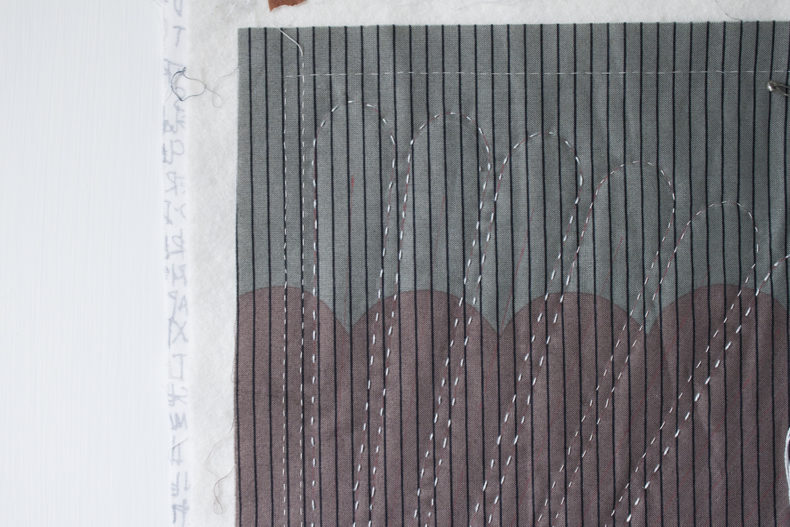 There we have it, a few ways to look at the project. And that’s just the start! I hope seeing these examples is helpful as you start to think about the direction you want to go.

I’ll leave things here for now, and I’m including some relevant resources below if you’re interested in a deeper dive.

Let me know what you think, and I’m really glad you’re following along!

+ Some of you asked for recommendations on good places to start with appliqué. My Trudy block on Creative Bug is a fantastic place to get some practice if you’re looking to do that before starting in on your own Hunt. Not only is this a very manageable size, but the videos will walk you through all the same steps technical steps that you’ll be using to make Hunt as well. Like Hunt, my Trudy block gives you an opportunity to work on outside curves–in this case they’re nice and gentle–which is good practice before tackling the tighter, outside curves in Hunt. (If you’re wanting a more indepth look at appliqué, you can see this other project from me on Creative Bug as well.)

+ If you’re curious about supplies, read about my favorite appliqué tools in my blog post here.

+ If you still need a copy of the pattern or templates, you can find the pattern here and the templates here.

+ If you’re following along, I’d love to see your progress! Feel free to share using #huntQAL … And there might be some giveaways as we go along. 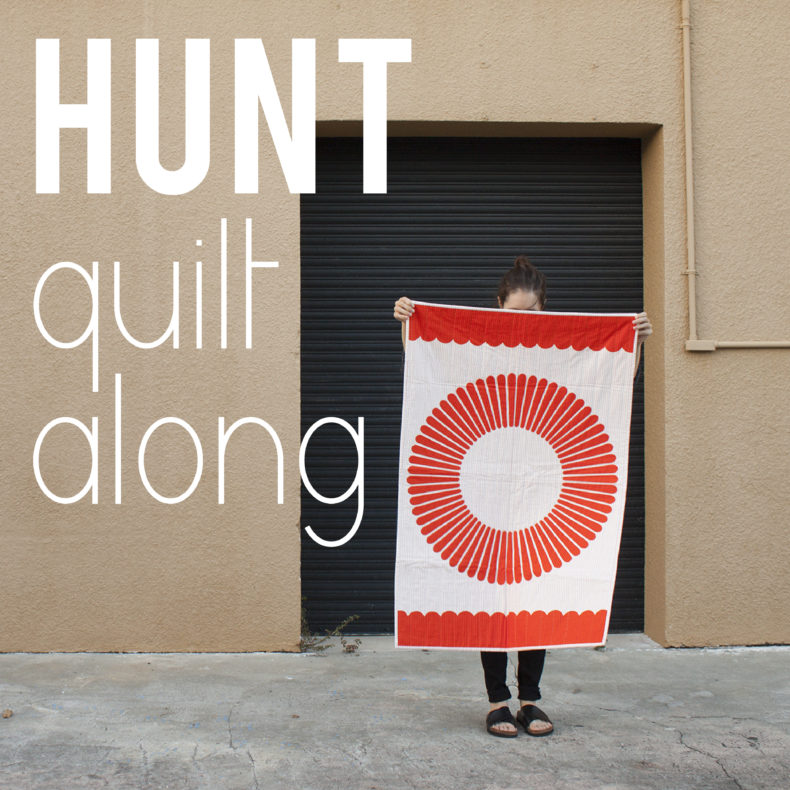