Earlier this year, Fancy Tiger Crafts did a Coat Sew-Along on their blog, which was all kinds of fun and very enticing to watch, especially because one of the featured participants, Sara, was making the Landgate by Merchant and Mills. The Landgate had already caught my attention after seeing it and other lovely jackets like it on pinterest. The shape, style and function seemed right up my alley. That spacious and cozy hood plus the drawstring and double pockets (yes, you can have patch and in seam pockets! win win.) were all speaking to me. With Euclid coming out, a Euclid Landgate was an easy add to the project wish list. 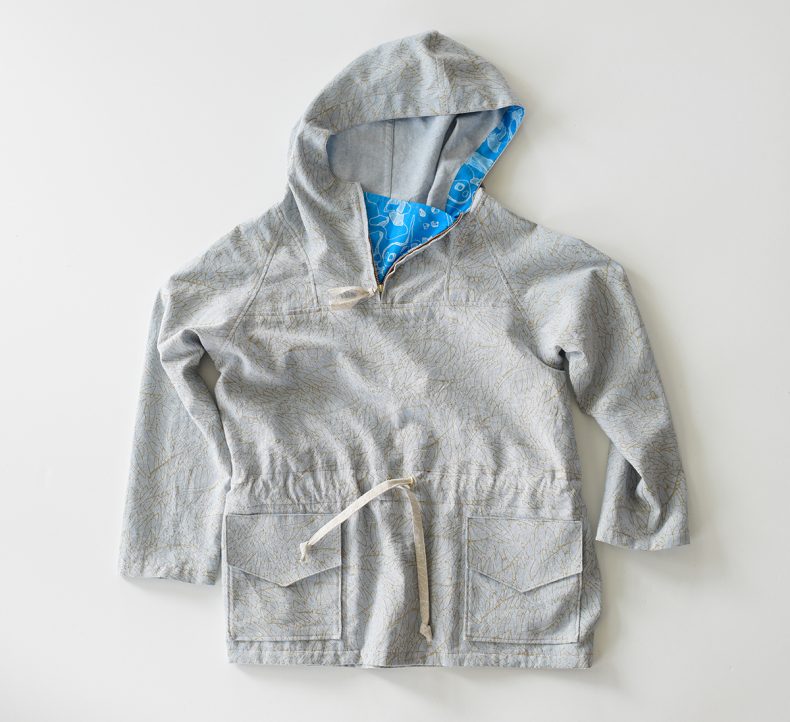 There were many helpful things that I gleaned from the Fancy Tiger sew-along prior to making my own. First, was the mention that some of the printed versions of the pattern (aka the one I was working from) was missing piece #11. Luckily I wasn’t scratching my head too long about it, because Sara gave me the heads up in the first post here. No worries if you’re missing this piece, you can email Merchant and Mills and they will send via email what you need. 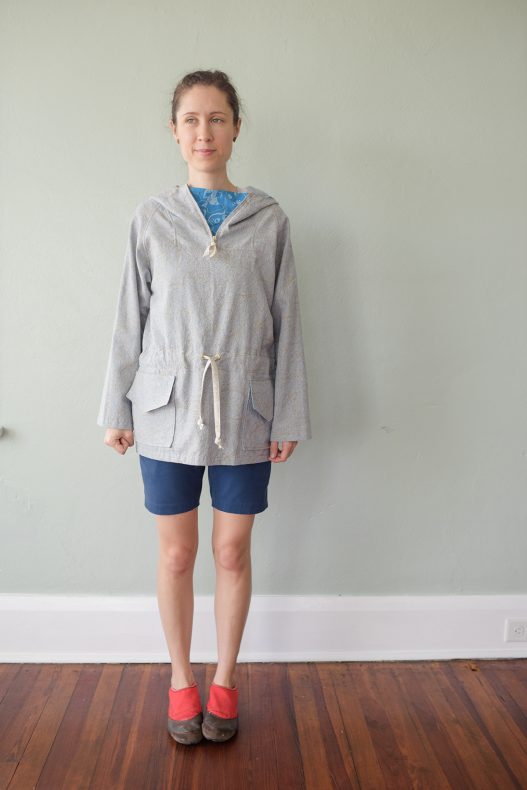 Next up was the sizing–this was a big question mark for me. The pattern is unisex, and according to the size charts on the back, even the XS was going to be quite roomy on me. This isn’t a huge deal, because I like for this type of coat to be spacious enough to wear layers underneath, but I didn’t want to be completely swallowed in a mass of fabric. It was nice being able to see how the sizing worked out in the sew-along, Sara ended up adding side gussets to provide the right fit at the hip. For mine, I didn’t do that, but did end up taking in the side and sleeve seams as well as shortening the overall length and the length of the sleeves by a few inches…but I’m short, so this is a common adaptation for me. 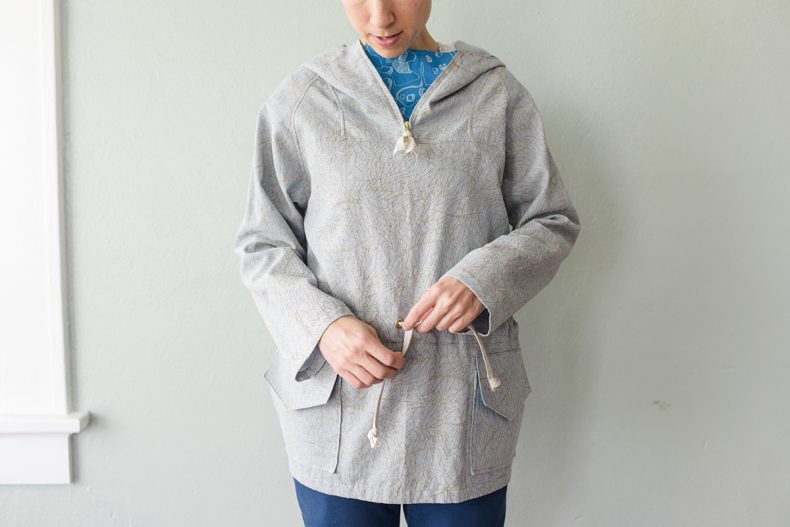 It was also nice to be able to see some finished versions of the Landgate in a few different places. Prior to the sew-along, it was a bit of an elusive project to find, mostly because I think it was a relatively new release. Here are some good versions that I found helpful to see.

+ Another Fancy Tiger participant in this post here–scroll down to see her version with its great modifications or look here on instagram.

+ And then the Landgate hashtag on instagram. You have to scroll around a little bit, but there are definitely some good versions to peruse.

After all of that, I had a much better idea of what to expect when making mine. I knew I needed to gather some supplies–like cording, a zipper, some grommets and snaps–all of which are details that make this project look so polished and interesting. Plus, I needed to figure out the fabric of course. 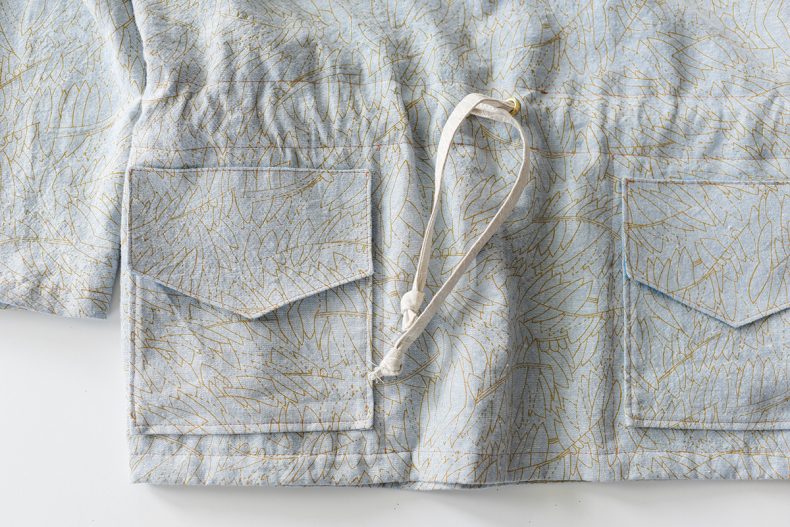 You have no idea how many grommets, snaps and cording options I collected prior to making this jacket. To be fair, many of the projects in the Euclid Lookbook required similar items, and so I had my eye out for such things for a while. You’ll notice that when photographed, there are no snaps on the front pockets. Yes, I was scared. It wasn’t that I didn’t have TONS of snaps to use, because I actually did, it’s just that I couldn’t get any of them to work when doing a trial run. I did end up adding some later. These by Dritz are what I could get to work, and you need this tool to make them work. And yes, it’s a nail biter all they way to the finish. Oh, but definitely check out this Noodlehead tutorial for installation. I had it on speed dial. 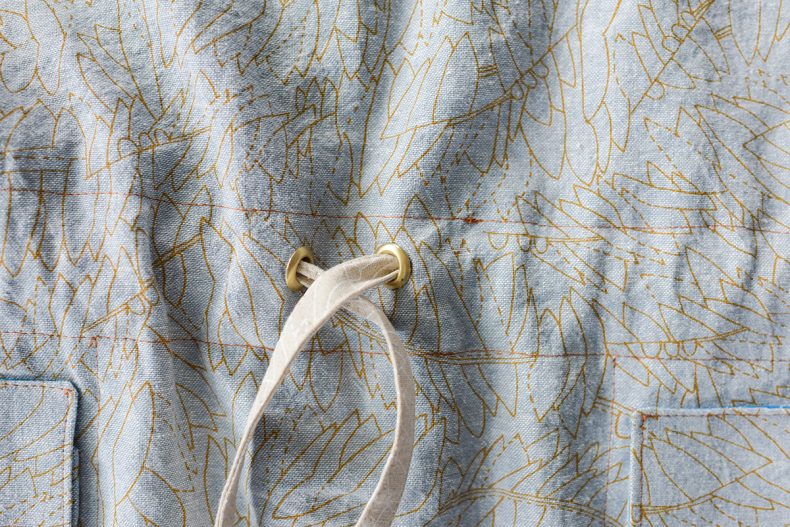 Grommets were another challenge. I found some that came in great colors, but I could not get them to work. In the end, it was this kind by Dritz with the tool included that seemed to be most successful.

As for cording, I had many options but made my own from a piece of Euclid. It seemed like the right fit, and Seamwork has a great tutorial for making your own as well as installing grommets here. 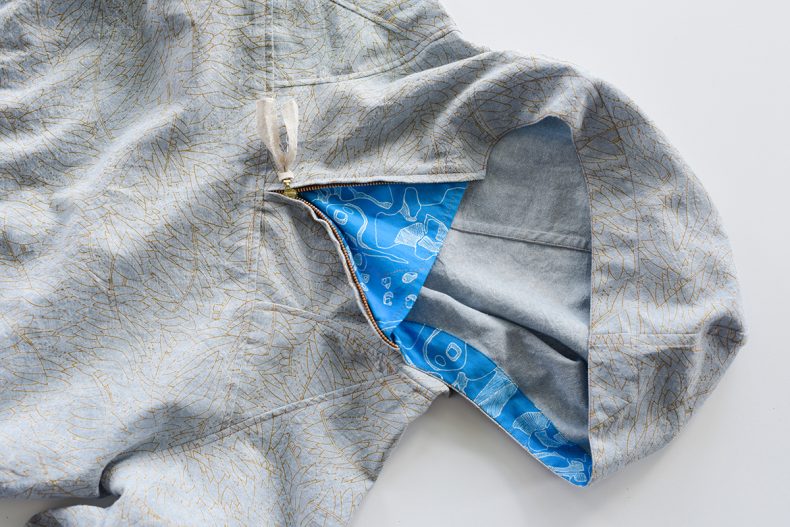 You’ll notice I used a splash of carkai in the zipper guard and hood facing. I like the added color and interest.

I really enjoyed the planning and research for this project, it’s engaging construction and the added challenge and intrigue of the detailing. Now that it’s finished, I’m eager to wear it when the weather is right. 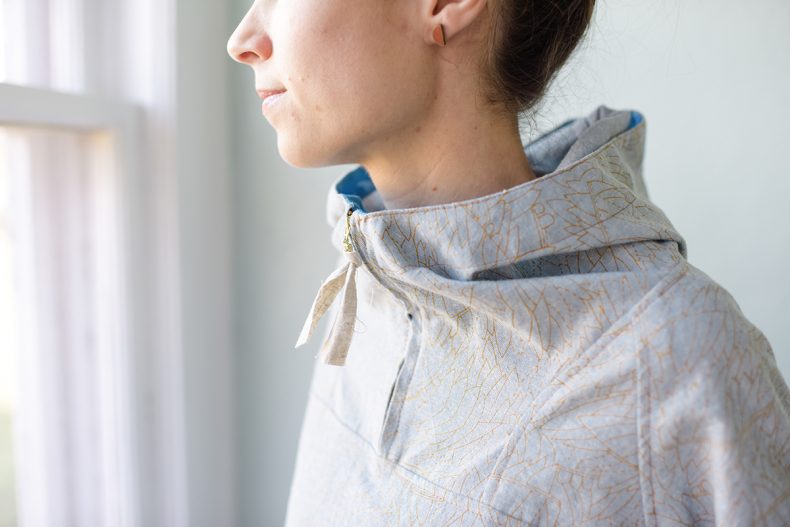 Pattern : The Landgate by Merchant and Mills

Fabrics : Euclid and a splash of Carkai