The top is done! What an adventure. 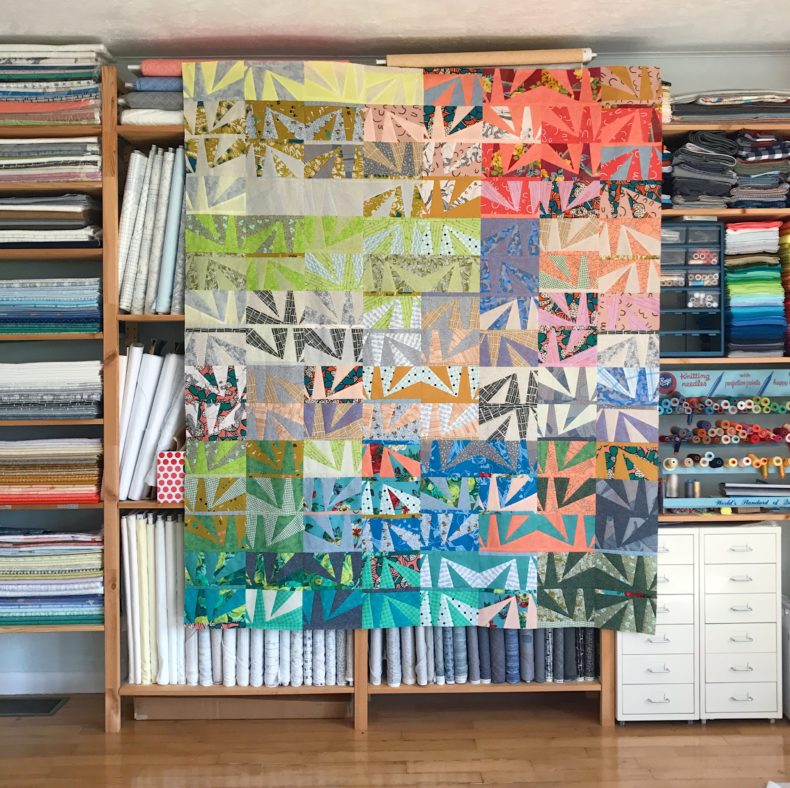 But let’s back up a bit. Since I’ve been documenting this entire process, I thought it’d be fun to do a video of the laying-out process. Big disclaimer to come. 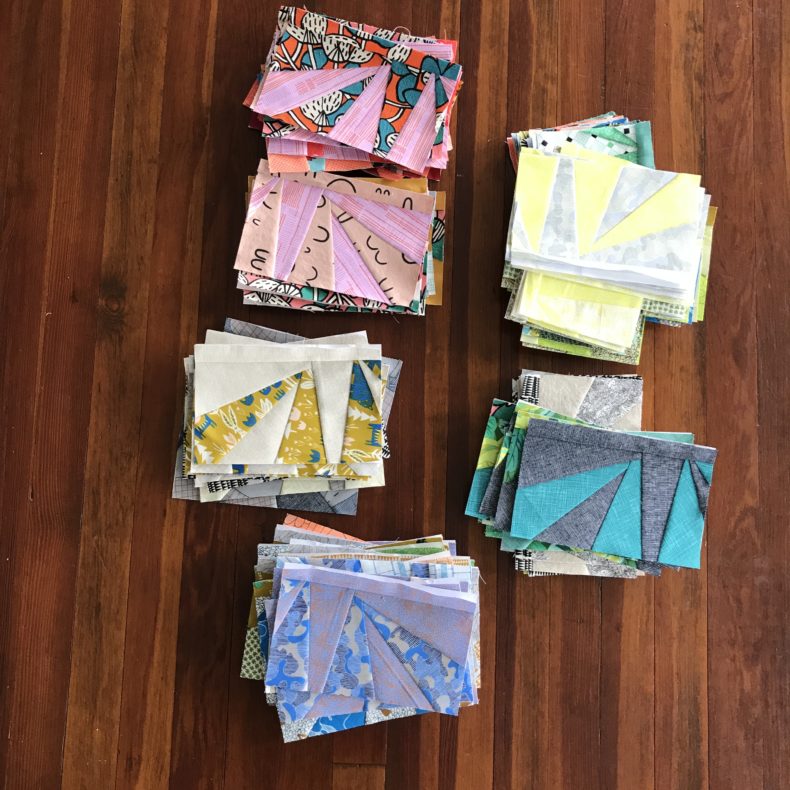 My blocks were gathered and generally sorted into piles by color–very generally. They’re more stacked by groupings on the design wall. Had I not been in such a hurry to lay it out (–out of sheer eagerness), I could have done a better job grouping them. Not really a big deal. 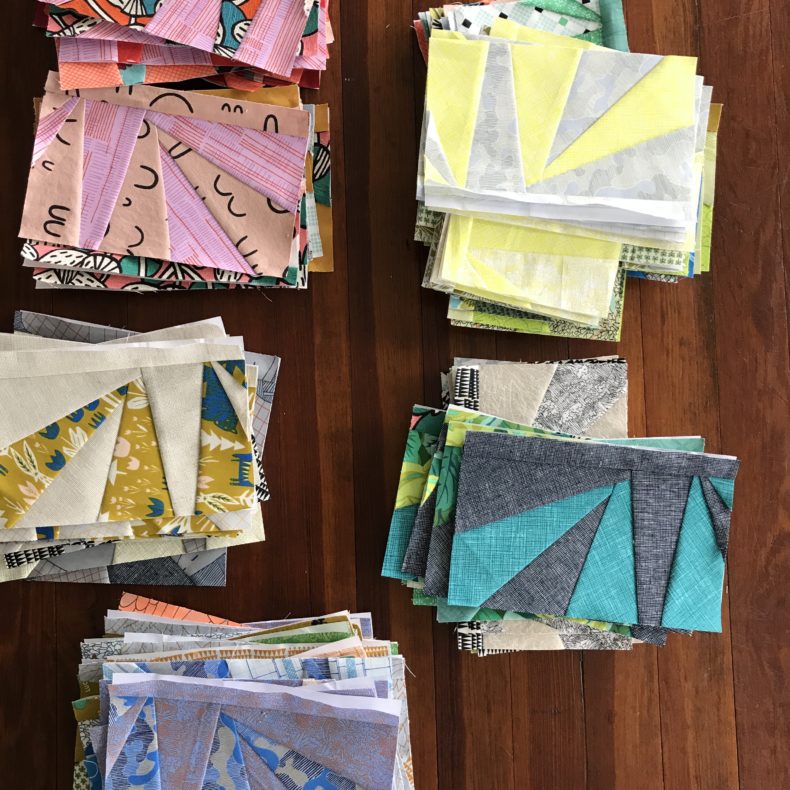 So yeah…you ready for the video? (BTW, do you spot the Blake cameo?)

A few things to note. First, don’t make a video of yourself. Although, I kind of don’t mean that. There’s something fun about watching it take shape. The reason why I wouldn’t recommend filming the process–or why I’m casting a little caution–is that it makes you all too aware of every move that you’re making, which then makes it way too easy to start over thinking things. I’m not usually into bringing unnecessary stress in to the creative environment. Heads up on that. 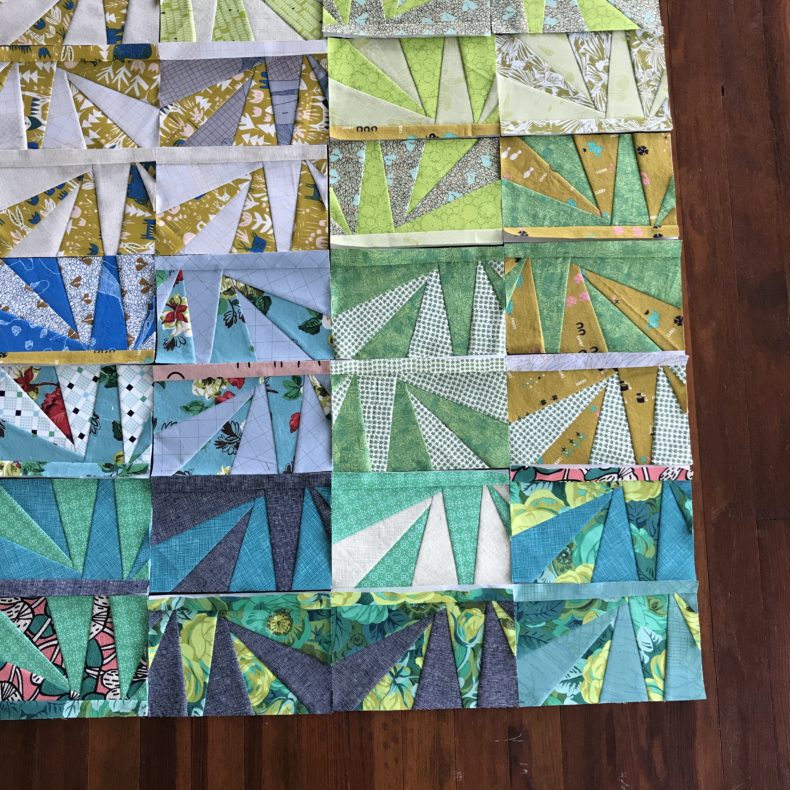 Over thinking layout (and almost any other choices when getting your creativity on) can be an easy place to lose perspective, which is exactly what I did. I fussed around with this layout way past the point of any changes making a difference. And, knowing that it was all being filmed, I felt pressure to make choices relatively quickly. (That’s not super great for the creative flow.) 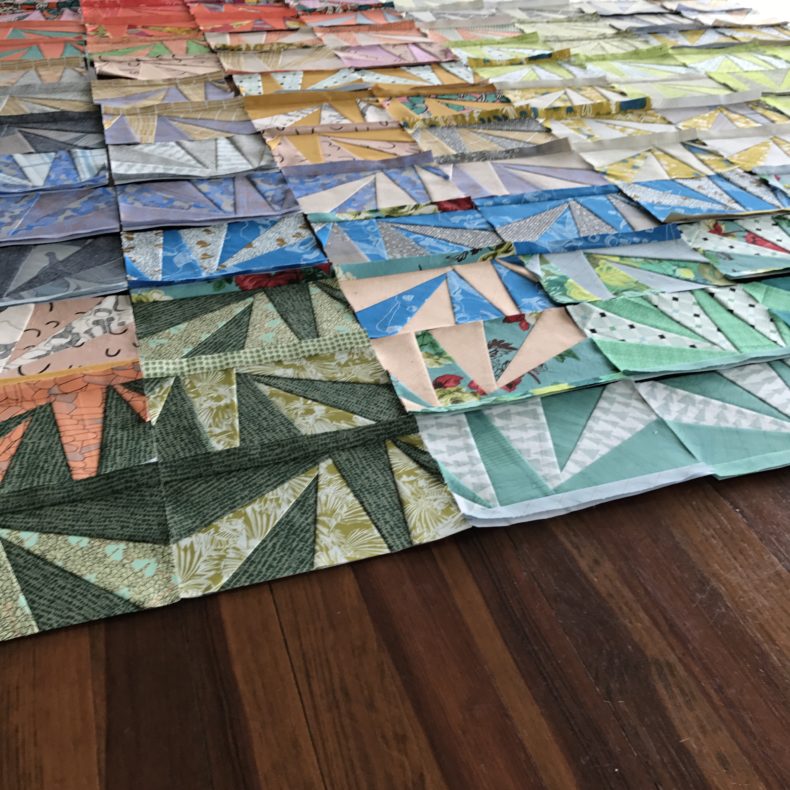 But still, I’ll admit, it is cool to watch a project take shape.

Aside from the unnecessary pressure of knowing that I was being watched, I was far less decisive with this layout than usual. 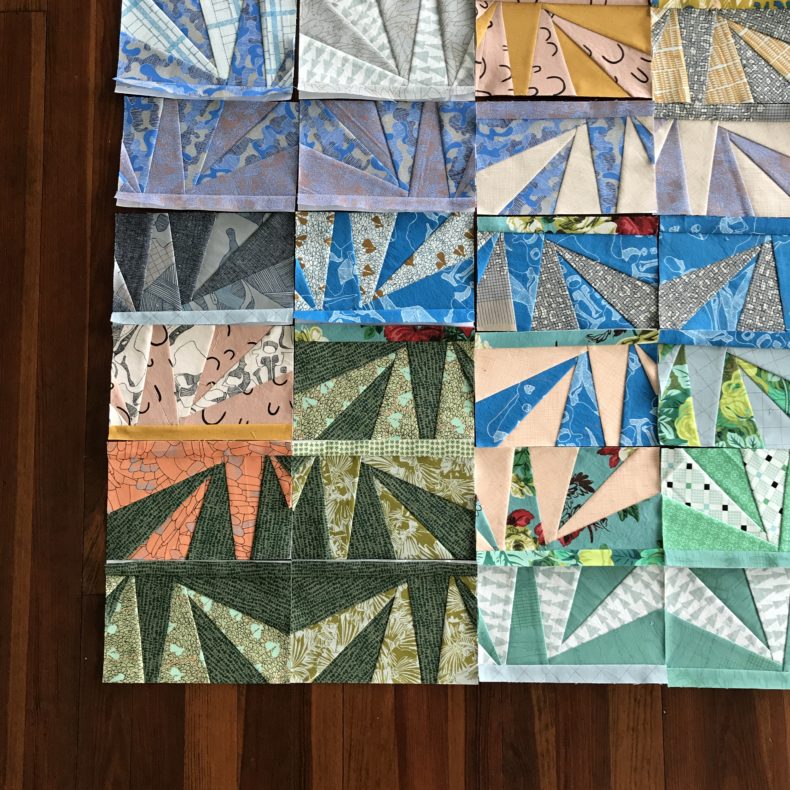 For one, I think it does make a difference whether or not you’re able to build something and see it in its entirety as you go–whether that’s by using a design wall or the floor. Seeing something in its entirety as you build it means you’re well aware of the overall picture before having to nail it all down, leaving less of a chance for big changes at the end. I totally admit, having the kind of space to do that isn’t always feasible, but nonetheless this was a realization for me. It made me think of other back-burner projects that just get taken out when I have the time and how I can use that segmentation to my advantage or how to reduce it if it’s not working for the project.

Most of the time I’m chugging through projects, because there’s a close deadline, and they can feel like one continuous thought–more or less. This one was such a great series of creative breaks that helped break up the flow of other projects that I’ve been tackling. As I look at the final layout, I think it captures that.

While reorganizing some stuff in the studio, I noticed these swatches–a note to self made awhile back. In making my very first blocks, I discovered this combo that I love between this Arroyo fabric and one of the new crosshatch colors. It was a fun discovery that I had to note for later. 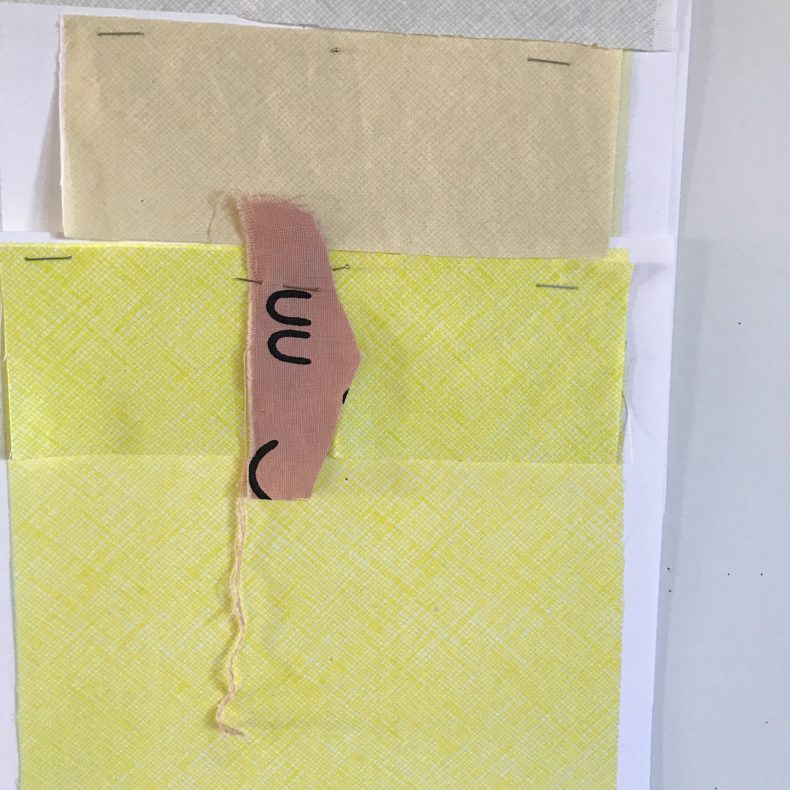 What’s cool is that this is actually represented in the quilt. I made sure of that once seeing my little reminder. If you look down towards the bottom in the next picture, you’ll see how I paired blocks that used those fabrics. There are so many other cases of this in this quilt, that I know it will be a fun one to cuddle up with on the couch. While in use, this quilt has so much to discover and to remember about the process of making it. 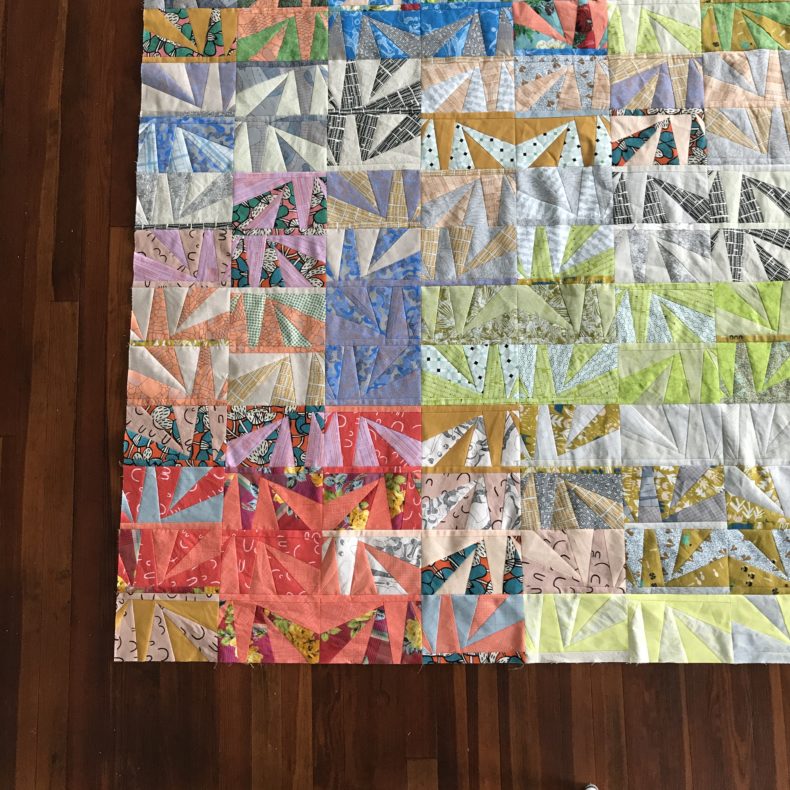 Now to decide on quilting and backing.

First, the backing. Conveniently some of my new extra-wide fabrics just arrived. What do you think of the colors? 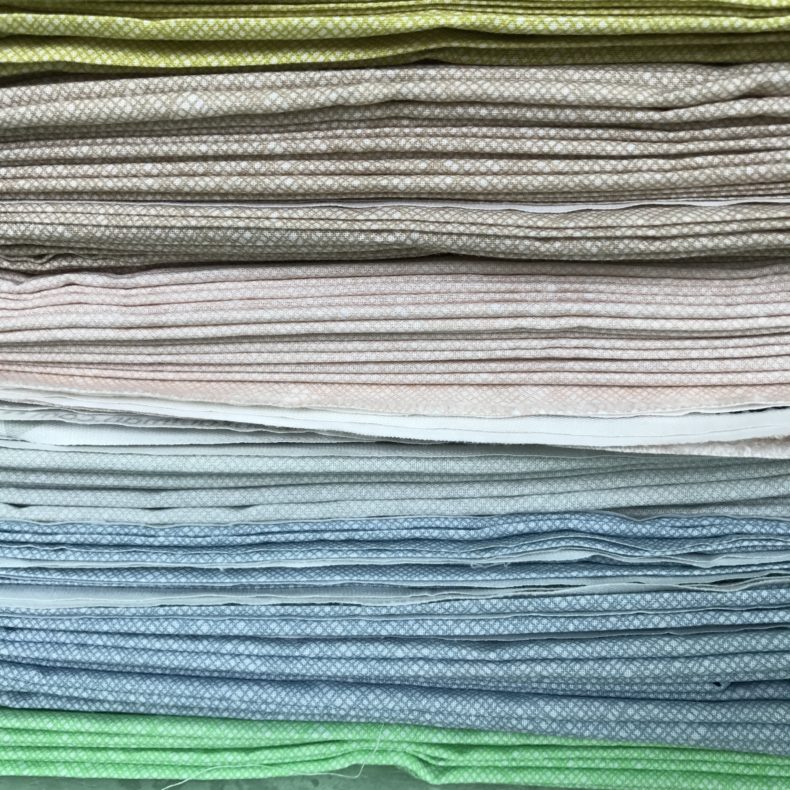 As for the quilting, to be honest, I’ve been thinking about handing this one off. There are so many great quilters out there, and I keep saying that I’d love to collaborate. But as usual, an idea started to simmer while I was sewing the blocks together. Who knows how it’ll end. I’ll keep you posted.

+ Don’t over think your layout. It’s easy to get caught up in the minutiae, and in many cases tweaking a few blocks here and there won’t make a big difference. I know this, and yet I totally fell into this trap this time. Oh well!

+ As for filming yourself, I know that my own review is a mixed one, but it was a worthwhile experience. Sometimes it is good to check in on yourself and to see how you operate. I learned something, and maybe you will too. Or, at least you’ll get a good laugh at watching me scramble around on the floor. Ha!

+ When teaching, I always get asked about when to take the paper off. I’ve saved this tip for this stage of the game, because now it’s relevant. I always prefer to keep the paper on as long as possible. It keeps the blocks clean and flat (big heart emoji!). But, it can get bulky and weighty, especially in projects like this were you have many blocks to sew together. My first pointer is to always remove the paper in the seam allowance after sewing 2 blocks together–this will make it easier to press and will eliminate those wee bits of paper at future seam intersections. Second pointer, I kept the paper on the blocks when sewing them into rows. Then, I took all of the paper off before sewing the rows together. This is kind of a new thing for me to do, but I tried it while making my recent Russell. It helps with the bulk, but still gives you the guidance and structure in the beginning. If you have other thoughts–I’m curious to know! 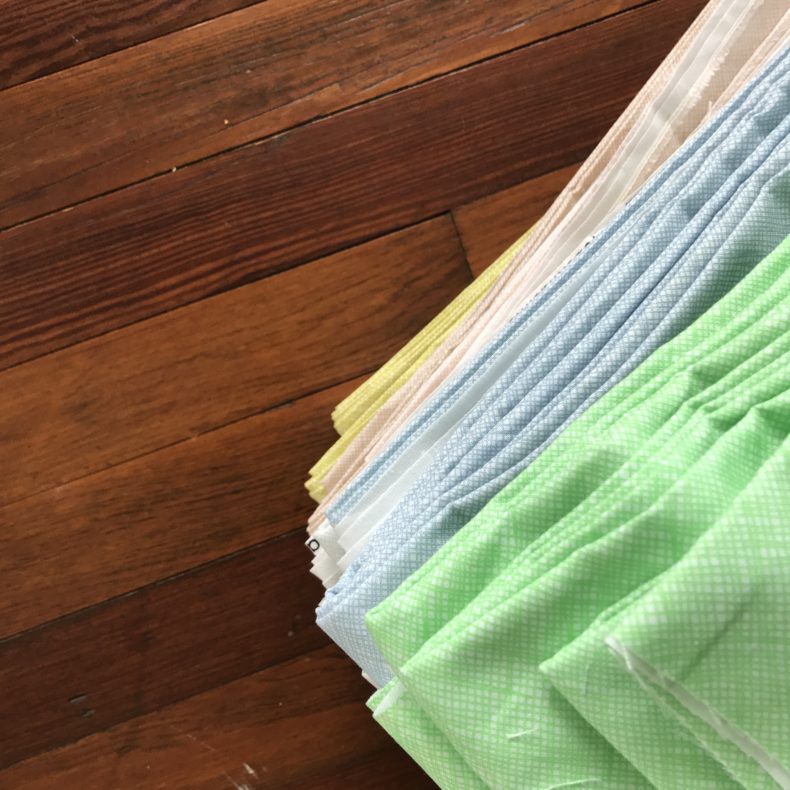 This Eads QAL has been a really interesting experience, and I’ve learned a lot–I hope you have too! It’s been fun sharing these bits and pieces with you as I’ve gone along, and I’ve loved seeing your progress and thoughts as well.

Because of how much I appreciate your following along, and because I think we should celebrate making it to the end–let’s do a giveaway! Leave a comment sharing something that you’ve learned/enjoyed/thought about/etc during this QAL. I’ll draw 3 winners Tuesday, Sept 5 at 9am EST, and they’ll win some fabric and pattern goodies that I’ll gather and send out. Sound good?